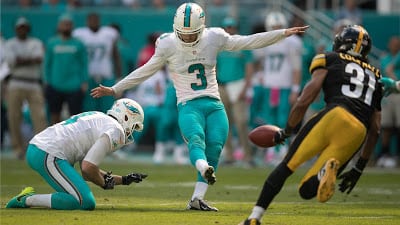 The 2017 draft has come and gone and this Dolphins team will look  very different this upcoming season in many areas. The defense has been revamped and the addition of many new players will be evident come training camp. On offense the offensive line has some new faces that will be competing for playing time this upcoming season as well. The one area Miami hasn’t addressed and said they won’t is kicker and this may be a mistake that comes back to bite them later this fall.

Everyone remembers the one big kick that Andrew Franks made on Christmas Eve last year in Buffalo to send the game into overtime that Miami then went on to eventually win. That was a big kick no way to spin it but in all honesty it was the only big kick Franks made all year and in reality the only big kick of his career.  And if we look back at some of his misses they were very costly.

Week 1 in Seattle Franks has a late field goal blocked because he kicked it very low and into the line of scrimmage. The kick was under 40 yards and very makeable for most decent NFL kickers. A made kick there and the Dolphins probably win that game to be honest.

Week 6 Miami is playing the Pittsburgh Steelers and they won so nothing to be worried about correct? WRONG! Franks misses two field goals that let Pittsburgh hang around for most of the game until Jay Ajayi and the offensive line put the victory away late in the 4th quarter. Again, one of the kicks Franks missed was under 40 yards and very makeable.

Week 13 Miami is on the road vs Baltimore and Baltimore drives down to get an early touchdown. Miami gets the ball and answers by getting into field goal range and Franks misses the field goal and with that one miss you literally saw the entire Dolphins team deflate in front of your eyes and Baltimore went on to blow out Miami. Now, if Franks makes that kick does Baltimore still beat Miami? Most likely yes. But Franks took Miami out of that game minutes into the first quarter by just taking the wind out of the Dolphins sails early on in that game.

If you go back to 2015 his week 2 miss vs Jacksonville most likely also cost Miami a win or a chance at winning the game vs a bad Jaguars team.

All kicks aren’t created equal folks. Field goals under 40 yards must be made at all times. Kicks vs playoff caliber teams and good teams (ex. Baltimore) must always be made if you want a chance to beat a good team. Time after time Franks came up short last season and he has had his worst moments in some very big spots. 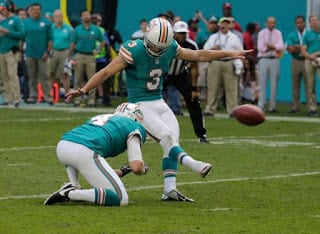 I’m not here telling you Andrew Franks is the worst kicker in the league, he clearly isn’t. I am saying the Dolphins front office shouldn’t sit back and just hand him the starting kickers job heading into the 2017 season which is what they have done. They have publicly said they aren’t bringing in veteran competition for him which I do not agree with at all. Miami will bring in some rookie undrafted kicker nobody has ever heard of as we get closer to July and August and that person will hang around for a few weeks of the preseason but will be gone in the blink of an eye.

We constantly hear the coaching staff, hell Clyde Christenson said it this week about the offensive line and the guards, that competition in practice for spots raises everyone game. This doesn’t hold true for the kicker position though? Andrew Franks hasn’t earned the right to be handed a starting kickers job in this league. One big kick on your resume shouldn’t get you that in this league. In Miami though it has and I think it is a mistake.

There are many veteran kickers out there on the open market and Miami should sign one to come in and push Franks and may the best man win. There are guys on the open market who have made big kicks in big NFL games that have a resume better than Franks. Let Franks earn it, let Franks beat them out, that will make Franks better in the long-run. And if he can’t beat them out then we know we have an issue at kicker and get ahead of a potential problem that could really hurt this team in a big game later in the season.

The Dolphins front office has done a tremendous job on improving this roster and the depth of this team this offseason through free agency and the draft. But let’s call it like it is, they have ignored special teams and the kicker position and I think it may be a big mistake heading into 2017. 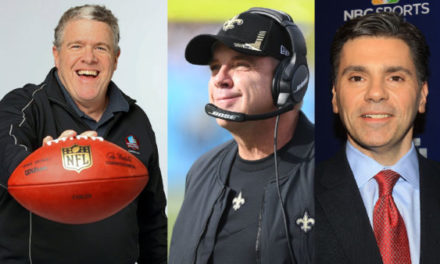 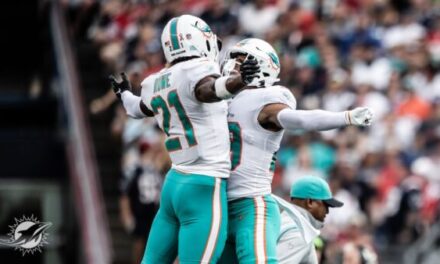 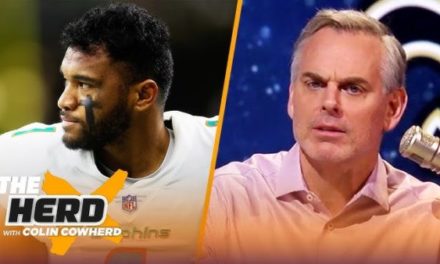 Colin Cowherd Not Sold on Tua in Miami; Flores Winning with a Limited Quarterback 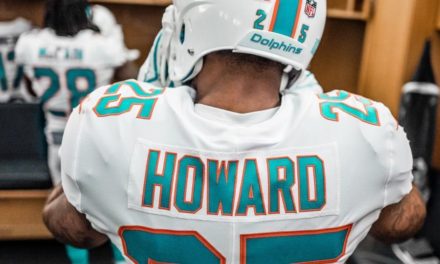 Xavien Howard Is Having Himself A Camp