Quarterback Options for the Miami Dolphins 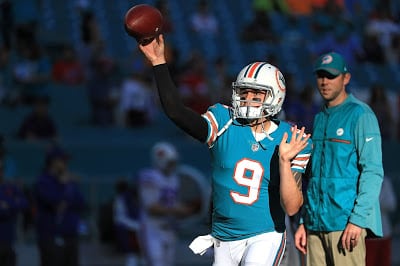 This off season the Dolphins have a long list of things to
accomplish to improve this roster. The Dolphins still need to figure out if
they are going to tag Jarvis Landry, resign him or let him walk. The team also
needs to figure out which pending free agents they are going to keep, if any.
Most fans do agree for the most part about which positions need an upgrade and
which one are good as they are.
The most disagreements come from the quarterback position. We
already know that Gase is set with Tannehill as his starting quarterback of the
future. I wrote an article about how his improvements will help him take the
team to the next level, so I won’t touch on that any further. What I will touch
on, the backup quarterback position. I won’t lie, the injury to Ryan
Tannehill’s knee is of concern. I have faith he will come back just fine with
it, but there is a chance that an unforeseen issue occurs, then what? The
Dolphins are set to repeat 2017 all over again? Gag me already.
What should the Dolphins do? I don’t know if any of you have
noticed, but Gase has made it a point in his career to adapt and overcome. He
has made mistakes and corrected those mistakes to not let them happen again. I
think he takes that same approach with getting a quarterback to play behind
Tannehill. The Dolphins need to get a quality backup quarterback, and don’t
worry, I have 3 free agents and one trade candidate.
Free Agent Quarterback options: 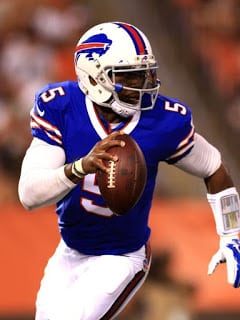 Tyrod Taylor: Taylor is a quality quarterback, but he had been inconsistent in
Buffalo and struggled when playing from behind. Regardless, he can run with the
ball and make plays with his arms and legs. Taylor had been productive in
Buffalo and doesn’t turn the ball over often. He doesn’t make contested throws
and has an overall record of 8-10 in the division. Taylor’s price tag may be a
little high for Miami. That could be a lot to invest in the quarterback
position.
Teddy Bridgewater: Bridgewater was finally active coming off that career threatening
knee injury and we have yet to see if he has regained his form. If Bridgewater
can come to Miami and pass a physical proving his knee is ready, then he can be
a good option behind Ryan Tannehill. Bridgewater would certainly be a good fit
in Miami’s offense as he has all the tools. He come to Miami on a one year
prove it deal, as most teams would fear his knee. Don’t forget, he is from
Miami.
Blaine Gabbert: Gabbert doesn’t give many the warm feeling that a guy like
Bridgewater or Taylor does, but he would come a at an affordable price and has
experience as a starter. Sure, it would be more of Jay Cutler kind of signing,
however, he could compete with a rookie and become the third string. As you can
see, the list of free agent quarter backs isn’t very deep.
Trade Prospects:
Jacoby Brissett: I was a huge fan of Brissett when he was drafted in 2016. He has good
size and athleticism to make things happen. He got lost on a bad Colts team,
but all things considered, he did not do a bad job of quickly learning the
playbook and taking control of the offense. He ended the season with 3,098
yards 13 touchdowns and 7 interceptions. The Dolphins would have to trade for
him, however, he may be more polished than a quarterback they would get with a
4th round pick. (I’m estimating what it would take to get him).
Speaking of Draft picks, let’s look at some quarterbacks I like in
this draft to Miami.
Quarterbacks in the Draft: 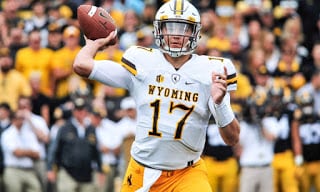 Josh Allen (Wyoming): Relax, before you bite my head off, hear me out. I
would not touch Josh Allen until the bottom of the fist (29-32 range) or into
the second round. The more I think, the more I see Allen tumbling in this
draft. He needs coaching, but I think he can be a good quarterback in the right
system with the right coaching. I think he fits Gase’s aggressive style.

Lamar Jackson (Louisville): I know, we are talking quarterbacks and I mention
a “wide receiver”. I’m joking, Lamar Jackson is a Quarterback and a
damn good one at that. I love his ability to run with the football and
continually make plays, which is nice, as Gase started using some RPO plays
with Tannehill in 2016. I’m certain that a guy like Lamar Jackson gets the
wheels turning of the options Gase would have with him. Jackson is a former
Heisman Trophy winner and has been extremely productive at Louisville. 9,043
yards passing 69 touchdowns. 4,132 yards and 50 TD’ss. Lamar Jackson totaled
13,175 yards and 119 touchdowns in just three seasons as a starter! Those are
insane numbers. Mike Vick like numbers, but a more polished passer.
Mason Rudolph (Oklahoma State): There are going to be mixed
reviews for Rudolph, but he has confidence in his throws, much like Carson
Palmer. He is less athletic than the first two quarterbacks I’ve mentioned, but
he has been very productive at Oklahoma State. He has thrown for 13,618 yards
and 92 touchdowns. That kind of production should not be overlooked. Rudolph
needs to develop to play in the NFL, but bringing him into Miami gives him a
perfect opportunity to sit for a couple of years and develop.
Kurt Benkert(Virginia): People have really started loving this kid’s
potential. Benkert showed his versatility as an athletic quarterback with a
good feel of the pocket at the Senior Bowl. Many people have begun to put Kurt
Benkert towards the top of their list of quarterbacks for this draft. He has
good size at 6’4 215 and a similar skill set to that of Ryan Tannehill, which
makes him a good fit in Miami.
Mike White (Western Kentucky): Here we go with another WKU
quarterback (Brandon Doughty), except this quarterback is much different. The
only comparison between those two, they went to the same school. White has good
NFL size and really showed out in the Senior Bowl, completing 72.7% of his
passes (8/11) for 128 yards and one touchdown. White has noticeably good
footwork and climbs the pocket well. He has developmental traits and has enough
athleticism to move around in the NFL.
Kyle Louletta(Richmond): Louletta had a good Senior Bowl showing, by
completing 8/12 (66.7%) of his passes for 198 yards and 3 touchdowns with 0
interceptions. Louletta is a small school guy with decent size at 6’3 215. He
is slight of frame and doesn’t exactly have great arm strength. He may be more
of a true back up in the NFL, but he may not be a bad option with the proper
play calling for him. He has some developmental traits that can’t be taught
such as poise and leadership. He anticipates his throws well. 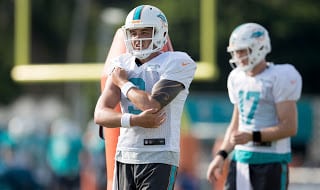 Conclusion:
The Dolphins have some decisions to make for the quarterback
position, however, I believe addressing the quarterback situation in the draft
is the best way to go. Free agency is thin at quarterback, while the draft is
full of developmental quarterbacks.
If it were up to me, I would draft one or two quarterbacks
depending on how the draft falls. I would resign David Fales as he has shown
some ability to be a decent back up option. I would also sign a free agent like
Teddy Bridgewater on a one year prove it deal. That gives the Dolphins 4 or 5
quarterbacks going into camp. Let the best 3 or 4 wins. Maybe a late round
rookie ends up on the practice squad.
Regardless, this is a situation that Dolphins need to address this
offseason. 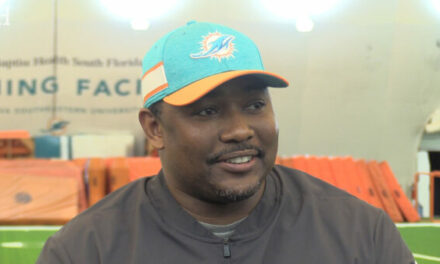 VIDEO: Stills and Tannehill having fun after Landry’s Touchdown 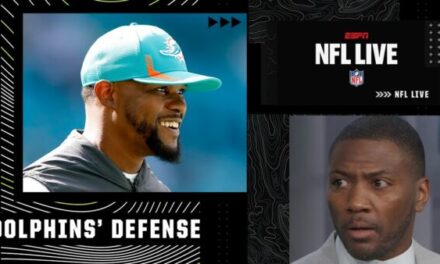 ESPN NFL LIVE: The Dolphins’ Defense Can Call Whatever The Hell it Wants