The Dolphins made out pretty well with the Landry trade, by netting Durham Smythe and Akeem Spence with the picks from the Browns. The Dolphins have shown the willingness to gamble with draft picks when they know they can replace them.

Yesterday, the Dolphins traded away the 7th round pick they received in a trade from the Browns for Jarvis Landry. The player they traded for, was Detroit defensive tackle, Akeem Spence. Right now, Spence is better than any 2019, 7th rounder. I do not mean that in he is better than nothing. I am saying he is a good fit for this defense and replaces what the Dolphins lost in Suh.

Let’s take a look at Spence and see what he offers the team.

This play is subtle. Do not blink or you will miss it. Spence takes on the double team from the center and right guard. He sees where the ball is going and turns to shield his linebacker (Jarrad Davis 40) from getting blocked and he is able to get in the backfield to make the play cleanly. These are the kind of things that Suh offered the defense.

Spence is beating the center (69), pushing him back until he was in Cam Newton’s face. That was part of the reason Cam nearly fumbled and Spence almost came up with the sack, which I don’t think he expected the ball to come out.

Just a few plays before, Spence just flat out beats right guard Trai Turner (70) into the backfield and comes up with the sack. There is no doubt how strong Spence is, as he is driving back the guard and is able to come up with the sack on Newton while the guard still has his hands on him. That is not an easy sack to make.

Part of being a stingy run defense, is having a defensive tackle that takes on blocks and is able to get off of them to make a tackle. Spence sees the ball, gets off the block and makes the tackle on Stewart for just a 2 yard gain.

Let’s finish off with him having one of his more impressive plays. It may not seem like much, but Spence gets doubled team and he feels the right guard release from the block and he immediately recognizes screen. Defensive lineman are taught when an offensive lineman releases from a block, look for screen. Spence sees screen, because he is always looking for the ball. He feels screen when the guard releases from the block. Spence chases down the running back for a tackle for loss.

In no way do I expect Spence to be considered on the level on Suh, however, Akeem Spence has shown flashes of being a space eating defensive tackle that can be disruptive. Spence also shows the ability to find the football and get off blocks. He is still young, under 27, knows the system, and is familiar with defensive line coach Kris Kocurec 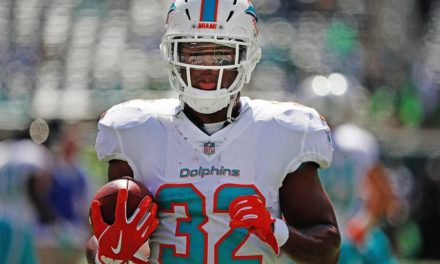 The Role of Kenyan Drake 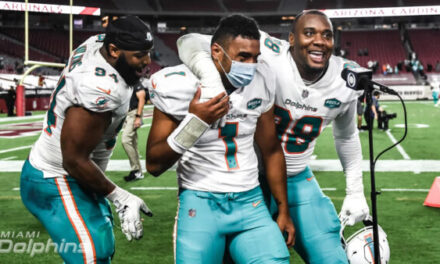 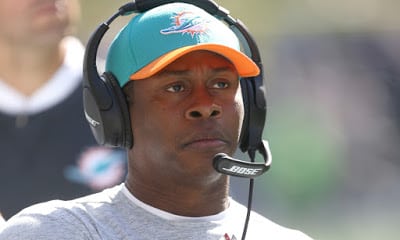