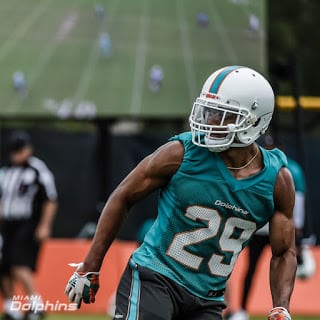 Another offseason in the books and another fresh batch of pessimism surrounding the Dolphins and their offseason moves. The media loves to hate us this time of year and for most of the regular season as well. Sports Illustrated went as far as to predict a 3-win season for us. I just don’t see us not winning at least as many games as last year if not improving.
While the team has taken some big losses across the board, I do not think that they digressed as a football team. In fact, I think they got a little bit better.
Full disclosure, having Tannenbaum at the helm makes me a bit nervous. I am from North Jersey, I watched how he handled the Jets and with some of his moves, at times it a bit of deja vu. But I have an odd trust for Chris Grier and Coach Gase that balances it out. Let’ look at each position group and see how each one made out this offseason.
DEFENSIVE LINE:
Losing Suh, the 5th ranked DT from Pro Focus Football is obviously a devastating blow. But what did we think was going to happen. This is typical Jet Era Tannenbaum, overpaying a player and entering into a contract that would destroy the teams cap if played out. Such will be missed but as good as he was on the field, he was lacking off the field. That kind of money you need to be a leader and he just didn’t fit the bill. He was not worth the 22.1 Million dollars he was owed. He took 60 Million from us over three years and never was the answer.
I like the upside of Davon Godchaux and Jordan Phillips, both coming on very cap friendly contracts. It will be great to see what Akeem Spence can do being reunited with his former position coach in Detroit. Vincent Taylor has the measurable but needs to be more consistent. If either Godchaux for Phillips can improve this year will be an over looked factor in the success off this year’s defense.
With every loss comes a gain and this year’s gain is Robert Quinn. Quinn is coming off some unremarkable seasons with the Rams but I think he will be a great fit in this scheme and a change of scenery will do him well. Early reports have him as looking good a good fit for the wide 9 scheme.  Cam Wake looks to be his typical self, albeit a year older and William Hayes and Andre Branch add some great depth. Both can also move to the DT position in a pinch.
This unit is deep and should do well with the fins plan to rotate fresh bodies, but the loss of Suh cuts a bit too deep. Overall this unit took the loss. 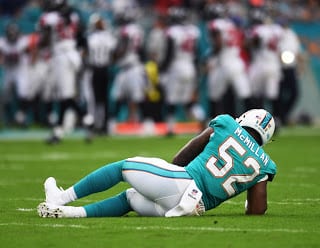 LINEBACKERS:
There is no place better to start than with rookie LB Raekwon McMillan. After securing the starting job at the young age of 20, Raekwon suffered a torn ACL on the first play of the first preseason game. There is a lot to be said here. First, as a rookie he outright won the starting job. That has to tell you something about the kid. Second, he spent the offseason recovering and working along Ryan Tannenhill. This kept him around the team and taking mental reps that I think people underestimate. Working alongside and competing with Tannenhill during his recover hopefully added to his already high level of maturity. HIs return is bigger than any loss on this unit. I look forward to having an athletic run stopper in the middle.
I would be remiss if I didn’t mention the loss if Lawrence Timmons. Looking back, the most remarkable moment about his time in Miami was going AWOL prior to the Charger’s game. His loss should not be felt.
If you watch the Dolphins you know their Achilles heel is their difficulty in covering the Tight Ends. I cannot say out right failure as at times they do manage to take a play making Tight End out of the game, but they have been less than consistent, and the results have been devastating to the Defense. Kiko Alonso returning does not help the cause but early word is Stephone Anthony has been doing an excellent job and why he a high round draft pick with the Saints. I do expect TJ McDonald to play some Nickel LB which should help and we can’t not sleep on the prospects of Rookie LB Jerome Baker. He is fast, has played with McMillan before and their chemistry alone may put him on the field more.
Chase Allen Returns and the Dolphins added the most intriguing undrafted free agent, Mike McCrary out of Michigan. Both will at minimum contribute on Special Teams and would not be surprised to see McCrary in the field situationally. He is a truck and sure tackler.
The return of Raekwon McMillan and the loss of underperforming improved this group and not just by a marginal amount. Add a visit by TJ McDonald to the Nickel LB group and its depth and this unit definitely is trending upward. A win for the Fins this offseason.
SECONDARY:
After years of hovering at mediocre, this unit is about to take the step to the next level. First, let’s start with the Belle of the Ball, Minkah Fitzpatrick. I absolutely loved this pick. What he brings in versatility in the field should do wonders for the flexibility of the Defense. He can play the boundary and the slot, although I expect him to start opposite Rashad Jones at Safety. He is also a very high character kid, whom is going to lead by example and challenge those around him, even seasoned vets. He should also help in TE coverage. This automatically makes the team better. We did lose Michael Thomas to Free Agency. This will hurt us more on special teams than on Defense as his play was consistently unspectacular. One thing about Rashad Jones. He is Rashad Jones. He one of the most tenured Dolphins, a natural leader and a beast on the field. It is going be interesting to see him and Minkah paired up.
Returning from Injury we have third year player and WR Convert, Tony Lippett. Prior to being placed on the IR last season, Lippett showed promise as potential starter with Xavier Howard. He is tall and lanky and can match up with bigger receivers. His return is a definitive positive for the Fins.
Miami is also hoping for Cordrea Tankersley to improve upon last years starting performance. He may not have been ready for action, but a little action under fire never hurt anyone and I think he has the mindset that will see him improve this year. Bobby McCain will hold down the slot like he always has and play into his contract extension that made him the highest paid slot corner in the league.  This unit has a ton of depth and especially if Cornell Armstrong plays the way that the Dolphins envision when they drafted him.  What I see here is another unit, that through a combination if draft picks and players returning from injury. Another solid off season win for the Dolphins. This unit can be outright spectacular this year.

As a unit, the Fin’s Defense has approved overall. While I do not undervalue Suh nor his impact on the field, I do not think his loss outweighs gains we made not only with our Linebackers and Secondary, but also with how these additions will play better within the Dolphins scheme. Miami should have more success covering opposing Tight Ends which have been responsible for big play after big play and drive extending third downs. From a character stand point the addition of Minkah Fitzpatrick alone makes it more than a successful offseason for the Dolphins. I look forward to a better overall Defensive performance by the Dolphins this year.
Part II :Offense and Special Teams coming soon 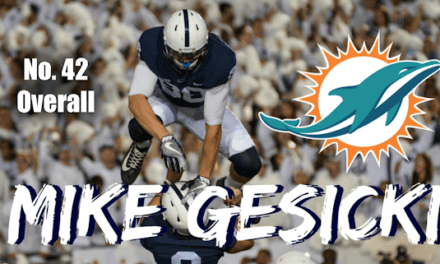 DT Daily for Fri, April 27th: Dolphins Pick Gesicki and Baker on Day 2 of the Draft 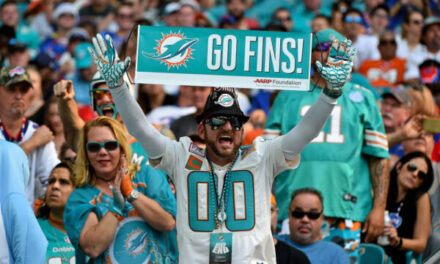 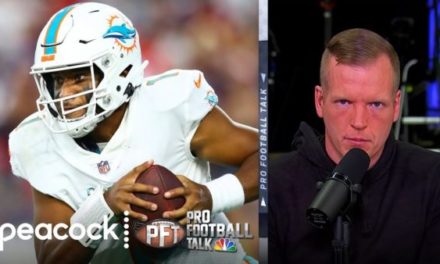