With the Super Bowl less than 2 weeks away, I figured it would be a great time to do our first mock draft
of the 2019 off-season. Lots can, and will happen over the next 3 months. This years format will be
different. I will have a full first round mock, followed by the Miami Dolphins 7 round mock draft.
Without further a-do, here is mock draft, version 1.0: 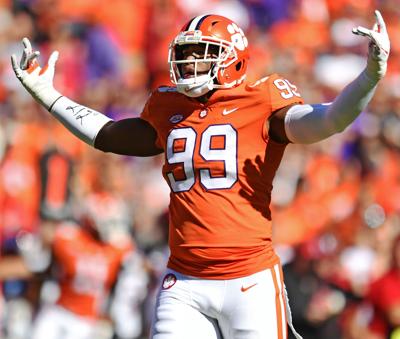 The Cardinals need help EVERYWHERE on this roster. Why not pair Chandler Jones up with an
elite defensive end in Ferrell. He has come on strong since his first year starting. Putting up a
jaw dropping 20 tackles for loss and 11.5 sacks makes him the premier edge rusher in this draft
in my opinion.

The 49ers will get a lift from their 22nd ranking in sacks by adding Allen. Allen boasted big
numbers, with 88 tackles and 17 sacks his senior season. If they use him the way the Ravens use
Terrell Suggs, he will be a force in the NFL.

Bosa was injured in his junior year and decided to rehab instead of playing out the rest of the
season. He is healthy and will be ready for the combine and pro day. He is very explosive and
has elite technique. Think of him as a mirror image of his brother, Joey.

Raiders could go any direction with their first of 3 picks in the round. I like White’s ability to run
sideline to sideline and get rid of his blockers to get to the ball carrier. He will give Jon Gruden a
big boost to the 26th ranked defense from 2018

While he had a rough go in the national title game, Williams is the best LT in this draft. The Bucs
were tied for 17th most in the league with 41. Bruce Arians will want to protect his franchise QB
going forward. 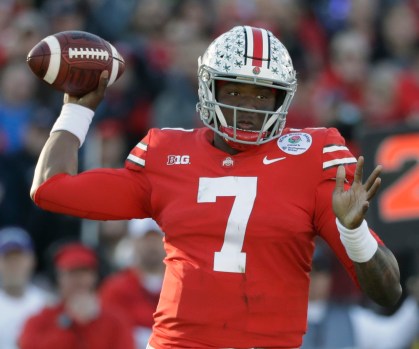 Haskins is arguably the best QB in this draft (albeit a weaker draft class). Giants need to move
on from Eli, Haskins will make it easier. He has a big arm and will make OBJ very happy (if he
remains)

While they could go QB here, I just don’t think Coughlin will go there with this pick. He prefers
bigger QBs. So they go Oliver, who will replace Fowler. Oliver can get after the passer and can
do so from the edge or interior. He also possesses great ability to set the edge on running plays

Lions get their next Ndamukong Suh with Williams. He has quickness off the ball, elite pass rush
abilities up the gut and can easily work around doubles. This could be the steal of the first
round.

Little gives the Bills their new LT to protect their investment in Josh Allen. Little does have some
concerns but with proper coaching should be able to overcome those flaws. But make no
mistake, Little is every bit of a LT and is aggressive at the point of attack.

New HC Vic Fangio already has 2 elite pass rushers in Denver, but he needs some help on the
back end. Deionte Thompson has size and speed to play FS at the next level. He will add a little
more juice to an already impressive defense. Think of him as Vic’s new Eddie Jackson.

Williams wasn’t sought after by opposing teams in 2018. He only came away with 2 INT but has
the ability to play man and zone. Playing for potential head coach Zac Taylor will keep a fire lit
under him and will help the Bengals improve from their opposing passer rating of 100.0 in 2018

Packers seem poised to move on from Nick Perry this offseason. They will replace him with
Polite. He is a pass rushing specialist and also has speed and power to play against the run.

The Dolphins have stated they will go looking for a signal caller in 2020. However, Murray
surprisingly entered the draft. If he sticks with football, the Dolphins will be hard pressed to
pass on him. Murray has all the traits to be a very good pro QB. His size will be questioned. But
his ability to play the game shouldn’t.

With Matthews anchoring the left side, the Falcons will need someone for the right. Taylor
could also slide inside to play LG at the next level. Either way, the Falcons will get better
protection for their franchise QB.

Redskins look to the future with this pick. He mirrors what Josh Norman is. He can get under
opposing players skin with his physicality at the LOS and has good length. Comes from a pro
style defense and can also play the nickel.

Sweat transferred from Michigan St after a few disciplinary issues and had a great career at
Mississippi St. The Panthers lack elite pass rushers and Sweat should help there. Peppers can’t
be relied on much anymore.

Gray falls into the Browns lap to help Myles Garrett. The Browns lacked in run defense and
Gray’s ability to set the edge will help some of those issues. He had 23 tackles for loss in his 3
year career in Michigan.

The Vikings invested 90M guaranteed to Kirk Cousins. Getting an athletic tackle will help keep
him up right. Riley Reiff is also getting to the wrong side of 30. This would be a great pick for
the Vikes.

Titans can use a guy like Ferguson. He has 45 career sacks and 67.5 tackles for loss in his 4 year
career at Tech. With Orakpo retiring to focus on cupcake career, they need someone to get
after Luck and Watson.

The Steelers only had 8 interceptions in the 2018 season. Insert Byron Murphy. Murphy had a
solid 2 year career at Washington. He has great zone cover skills and is just as good in man to
man. He will fit in great in Pittsburgh.

He seems like a perfect fit for Seattle. Risner can definitely go much higher than this but for the
sake of the first mock, he falls to Seattle. He is a bit older (24) but has the ability to push his
opponent around. Seattle has lacked a great OL in a while. With Wilson taking a beating, this a
great fit.

He needs to add bulk but he is an explosive WR. Collecting 2,413 yards and 17 TDs in his 2 years
at Norman, Brown will give the Ravens a vertical threat.

Getting Harry will give a sense of relief for DeAndre Hopkins. Harry will give the Texans another
big WR with a big catch radius. This will also help other WR with the underneath stuff which will
make Watson even more effective.

Raiders nabbing Devin White at 4 will open up the opportunity to draft another defender. This
time, DT Lawrence. He is an elite run defender and has the ability to get after the passer.
Gruden gets another building block on defense. This pick will also be scrutinized (Pick for Mack)

Devin Bush gives the Eagles another versatile defender and an upgrade to the unit. He discects
plays quickly and can lay the boom. In a division with Zeke and Barkley, Bush will add to this
defense.

Colts will benefit adding Simmons to an already stout defense. With age getting to the position,
Simmons will allow the linebackers to eat by swallowing up double teams.

What better way to replace Amari Cooper by adding a WR with pick from Dallas. Harmon is
strong, big bodied and will give Carr a weapon back at WR.

Another Clemson DL off the board in the first round. Wilkins is very versatile and will provide a
run stuffing DT. After what the Patriots did to them on the ground, this is a good direction to
take.

What do you do with the most powerful offense in the league? Add to it of course. They lack
depth at WR behind Hill, so Brown will add more pop to it. He is essentially a healthier Sammy
Watkins and can provide major mismatch issues for teams.

The last few years have not been kind to Aaron Rodgers and his health. Adding an interior OL
will give less pressure on Rodgers and more emphasis of running the ball with new HC Matt
Lefleur, who loves to run the ball.

Patriots need to look to the future. Drew Lock gives them that. He can sit behind Brady for a
year or 2 and be ready to take the reigns. Or, the Patriots sell to the highest bidder again.
Which they have done with Jimmy G and Brissett, among others.

The Rams have a ton of talent on offense. But they lack some size in the red zone. Irv Smith
scored 7 TDs this season for Alabama and will give another over the middle threat and red zone
target. The rich get richer.

Should the Dolphins give Tunsil an extension?