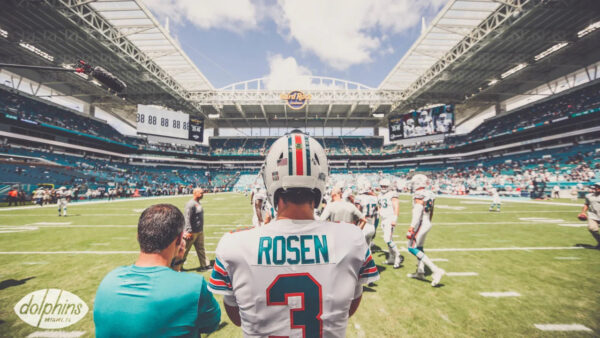 There’s been some misconceptions surrounding the future of Dolphins QB Josh Rosen and I’m not saying my opinion is any better, but I definitely don’t agree with some of the things that are being said about the Miami Dolphins as it pertains to Josh Rosen’s future.

All this debate started right after the Dolphins made the blockbuster trade away of Laremy Tunsil to the Houston Texans for multiple first round picks including a second rounder.  The fanbase and the local media outlets that cover the Miami Dolphins have been in a news frenzy because they just acquired Rosen this offseason and are concerned, he is a one and done deal, so to speak.

I keep hearing ‘Well, if the idea was to acquire as many draft picks as possible, why make a move for a quarterback?’

Another one I keep hearing is ‘if the Dolphins were going to trade former left tackle Laremy Tunsil, why even trade for Rosen?’

First, the Dolphins did not head into the 2019 offseason with the idea of they were going to trade for Josh Rosen and trade away Laremy Tunsil. Other teams pursued the Dolphins and it was too good for GM Chris Grier to pass up. So, neither one of those train of thoughts is correct. Nor does either one of those situations have to do with the other. The other being Josh Rosen.

Now, the Dolphins may be stockpiling draft picks but that doesn’t necessarily mean they are going to use them all to move up and acquire a future quarterback. The Dolphins are tanking for a reason, guys.  They are tanking so they don’t have to move up in the 2020 draft. They will be at the top of the draft.

Speaking of tanking, here is another misperception I am hearing as it relates to this whole topic….’If the Dolphins are tanking for a quarterback, then Rosen will be gone next year.’

While I agree that Rosen is not a franchise quarterback that doesn’t mean I can’t see him as a long-term backup for the Dolphins. For argument’s sake, let’s say the Dolphins draft Tua Tagovailoa in next year’s draft. Tua, regardless of what you might think, is not going to be handed the job like Tannehill was. He’s going to need some competition and that’s where Rosen comes in. It isn’t going to be 39, 40-year old Ryan Fitzpatrick. Also, many NFL rookies, well, their bodies anyway, have a hard time adjusting to the speed of the NFL and it is a possibility that Tua could get hurt. Remember what happened to Dolphins LB Raekwon McMillian his rookie season? So, if Tua gets hurt, it be nice to have Rosen on the roster because they can keep him on the cheap for another 2 to 3 years. And he already knows the system so all of that makes life a little easier.

Look, Rosen is only in his second season. It’s hard to write him off but on the other side of the coin, it’s not. I’m just going to reiterate. The Dolphins did not plan to acquire Josh Rosen. He just fell in their lap, so to speak. But this regime wants to put their own stamp on this team and I’m not saying that he can’t be a starter for some team, it is just the chances are remote at this point. No team will trade for him. He has no value and it makes no sense to me to release him. Now, if he says, he wants to be traded after this season, that’s different.

Continuing this discussion, I just want to add that I know there is a select group of fans who believe that Rosen is a franchise quarterback. I just want to say, nothing is guaranteed in this world. Just because a player is selected 10th overall doesn’t mean he is entitled to a starting job. It is this same group of people who make the same excuses for Ryan Tannehill. These excuses get old and that’s all I’m going to say about that.

Rosen is currently a short-term rental for this team. Is this whole situation that the Dolphins are going through, fair to him? No. Is it fair to him that he has no help on offense? No. Can we pity him? Sure. The situation stinks.

DolphinsTalk.com Daily for Thursday Nov, 16th: Interview with Greg Likens from 790 The Ticket