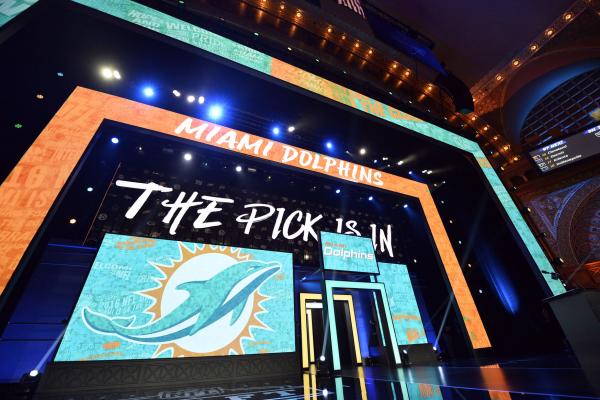 Like the rest of America I am essentially on house arrest because of the Coronavirus outbreak and I am not supposed to leave my home. So, I am doing my second mock draft of the season as we are less than one month away from the NFL draft taking place from parts unknown. In my last mock draft (version 1.0) I did trades and got creative and had a few teams (including Miami) moving up and down the draft board. The feedback I got was split, about 50% of the readers loved my mock and about 50% of you hated it. This time around I am not doing any trades in this mock and will just go with the draft order we have today to keep it simple. Also, something to consider with this mock draft is there are still a few big name free agents out on the open market like Jadeveon Clowney, Logan Ryan, Everson Griffen, and Cam Newton just to name a few. As well as the Jaguars looking to trade pass rusher Yannick Ngakoue prior to the draft possibly. So, if any of these players sign prior to the draft it will change things in how I have this round 1 of this mock playing out.

Being a Miami Dolphins fan-site you are surly interested in what Miami does with their three picks in Rd 1. So I will go in depth with all three of those picks below and give you my logic and at the bottom of the round 1 mock draft tell you where I think Miami will be looking with their two picks in round 2. So be sure to read to the very end.

Without any further ado let’s get to my 2020 mock draft version 2.0

OK, no surprise here I have the Dolphins taking a quarterback with their first pick in round 1. It is the biggest need on the roster and has been the biggest need since March 13th, 2000 the day Dan Marino retired. With Joe Burrow off the board already it comes down to two players, Tua or Herbert. You can make a case for either one honestly and come draft night I wouldn’t be shocked if Miami went with either of them. In my mock though I am going with Tua. I know, I know…..there are a lot of “Tua Haters” out there and nothing I type here in the next few sentences will change your mind or stop you from hating him. So stop reading now and don’t put yourself through this. Just move on with the rest of the article or skip to pick #18 to see what Miami does next. OK, now that the group of people who just hate Tua is gone, we will move on. Both Tua and Herbert have their flaws, with Tua its the injuries and with Herbert it’s with not having a completely polished skill set just yet when it comes to the little things of playing QB. To me though Tua is a more finished product as of today and slightly more NFL-ready at this time. Is it a role of the dice because of his injuries? Your damn right it is. But its about time Miami swung big and went for it in regards to the quarterback position. If Tua gets re-injured or if he just falls flat on his face then in 2 years or so we are taking another QB in round 1 of the NFL Draft. But IF….yes IF….Tua lives up to the hype that has been placed on him and can stay healthy then this franchise will do big things in the years to come. Risk is worth the reward here.

We did FIVE shows this week on the https://t.co/jTLjtUE3tr Podcast. In case you missed any be sure to check them out right here https://t.co/p3xK5PGB74

I can hear you yelling at your mobile device, tablet, or computer right now…“Oh my god why are you taking a player on defense don’t you know Miami needs an offensive tackle!?!?!?!” CALM DOWN!! TAKE A DEEP BREATH!!! BREATH INTO A PAPER BAG!!! Now, hear me out. Yes, the Dolphins have a glaring need at offensive tackle that must be addressed, but we are in round 1 and the Dolphins are not in a position to “reach” for any player at any position. This Dolphins roster is void of talent almost everywhere and in round 1 they must go BPA! Best Player Available! This isn’t a one year rebuild and Miami isn’t going to fill every need in one offseason. Not to mention Miami has picks coming up at 26, 39, and 56 and we could get an offensive tackle there. Let’s see how the board falls. In this draft there are four clear cut left tackles worthy of being taken here at pick #18 and the last one just went off the board a few spots ahead of us. So, instead of reaching for an offensive tackle and taking him higher than he should go (we did that with Ja’Wuan James and it didn’t work out, learn from previous mistakes) we take the best player on the board and the second best pass rusher in this draft. Remember the four premium positions on all NFL rosters (QB, OT, Pass Rusher, CB). Boom, Chaisson falls to us at pick #18 and Miami adds an edge rusher to a defensive front that really needs help in that area. Charles Harris stinks, nobody knows what’s going on with Taco Charlton, and the addition of guys like Shaq Lawsom, Emmanual Ogbah, and Kyle Van Noy are nice but we need a young talent at edge rusher who we control for five years on a cheap contract who hopefully can grow into our #1 edge rusher for many years to come. The Dolphins pass rush was awful last year and while yes the free agent additions are nice players, we sort of know what we are getting with them and what their ceiling is already. With Chaisson we may be getting a “special” player with a very high ceiling.

I can still hear you screaming…“WHAT?!? ANOTHER DEFENSIVE PLAYER. ARE YOU NUTS!? I AM GLAD YOU ARE NOT THE REAL GM FOR MIAMI!” Ok, got that out of your system? Now, let me explain. Miami sticks with BPA here for the same reason as I mentioned above with the K’Lavon Chaisson pick at #18. Miami isn’t in a position to reach for a player to fill a need. Those days are over. If Josh Jones the OT from Houston was on the board maybe I take him here as at 26 as that is a realistic spot for him to go in this draft and it would match up BPA with filling a need for Miami. But he wasn’t on the board as New Orleans took him in this mock prior to pick #26. So, we move on and take the best player available who happens to also fill another need for the Dolphins which is at safety. We get a “swiss army knife/do it all” safety from Alabama……….wait, wait, haven’t we been down this road before? Yes, we have but just because Minkah Fitzpatrick couldn’t take the heat and threw a temper tantrum and cried his way out of South Florida doesn’t mean every talented safety from Alabama will. So, why Xavier McKinney? One, we know the key to Brian Flores style of defense is having a strong secondary that has guys moving all of the field. For that you need players that can match up and do multiple things. Xavier can play in the slot, in the box, or free safety (sounds like a carbon copy of Minkah Fitzpatrick I know.) He has a high football IQ and cornerback skills but the body of a safety. He is a monster in sub-packages and Brian Flores will drool over him. Second, we just saw Miami promote their cornerbacks coach (Josh Boyer) to defensive coordinator so expect a big emphasis on the secondary play period as that is his area of expertise. Howard, Jones, McCain, McKinney, Rowe…..that could be arguably the best secondary in the NFL when the Dolphins are in their nickle package and mind you, the Dolphins are in their nickle package or dime package the majority of the time on defense. 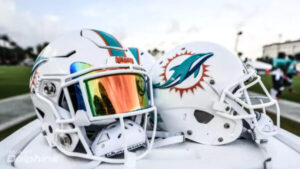 So, now that round 1 is over let me tell you what I would be looking at heading into round 2 of this draft with picks #39 and 56. With how this mock fell, as we head into round 2 the highest rated players on most teams draft boards are two positions Miami has a need at. They are running back and offensive line. I have only one running back going in round 1 so if I am the Dolphins yes they can jump on one at pick 39 and get JK Dobbins, Jonathan Taylor, Cam Akers, or Clyde-Edwards Helaire. Honestly though, all of those guys won’t be gone by pick #56 when Miami is on the clock again in round 2, so I am holding off on running back until pick #56 and looking offensive line at #39. With the focus turned to the offensive line there are a few players that fall into that early second round range at offensive tackle and even center. Austin Jackson or Lucas Niang should both be on the board come pick #39 and would both be guys that can play right away in 2020 at left tackle for Miami. The Dolphins would get good value taking one of them there. Other possibilities are if the Dolphins wanted to go with Cesar Ruiz the C/G at pick #39 to sure up the interior of the offensive line and maybe find their center of the future. Ted Karras could move to RG (or Ruiz could also play RG) and with the signing of Flowers you would solidify the interior of your offensive line for 2020 and maybe years to come.

In closing, one thing Dolphins fans have to remember, this isn’t a one year rebuild. The Dolphins roster will not be a finished product after this 2020 draft. They will still have numerous holes to fill. So, Chris Grier and his team cannot reach for any player at any position. It is about adding the best football players to this roster right now and raising the talent level; whether they play on offense or defense. This Dolphins team found a way to win 5 games last year with an offensive line that was lackluster to put it nicely and have added two key players in free agency in Ereck Flowers and Ted Karras. We know heading into the draft the offensive line is something that must be addressed as its not where it needs to be just yet, but they cannot pass on better players at other positions to get a marginal player to fill a need on the offensive line. Especially in the early rounds like rounds 1 and 2 of this draft. If the Dolphins can put the finishing touches on their secondary and pass rush this year, get a long-term answer at quarterback, a young dynamic running back to boot then this offseason and draft was a success. Maybe they don’t get a long-term answer at left tackle in this draft, maybe they just find a capable right tackle, if so, that’s OK! Because if heading into 2021 the only big need is putting the last piece or pieces in place on the offensive line it will mean we are almost finished with our rebuild and on our way to being a contender! 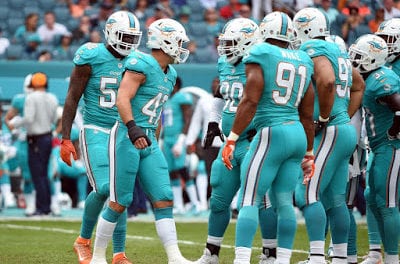