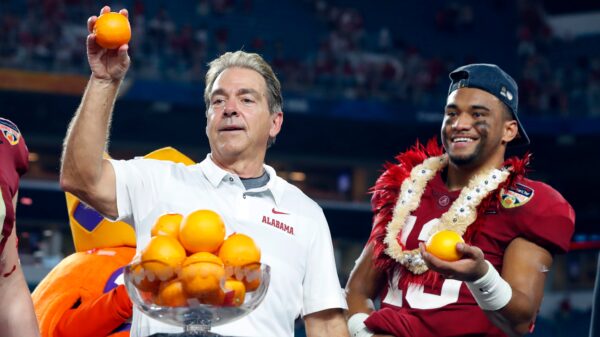 The quarterback position is a complicated position to judge. It’s not a simple as can you play or not. Every year players come out of college and they get dissected based on a player’s arm strength, accuracy, leadership, durability, how he performs in big, etc.  The biggest thing I don’t like is how teams evaluate the talent around the quarterback. This year Jordan Love was drafted in the first round and has a lot of talent, but he had an off-year and people were blaming it on being with a new coach his final year and not having good enough talent. In the case of Tua Tagovailoa, one knock is because he played with great talent at Alabama and he’s a product of the culture there. in reality though Tua shouldn’t be knocked for playing at Alabama.

Last week Pro Football Talk analyst Chris Simms said he believed 2nd-year quarterback Jarrett Stidham would be better than Tagovailoa. One of the reasons is because he believes Tagovailoa is a product of Alabama and is the benefit of playing around great talent. Look, Simms like all of us, is entitled to his opinion and time will tell if he is right or not, but to say Tagovailoa is just a product of the talent he was surrounded by I don’t agree with. Alabama, in the past decade prior to the 2020 NFL draft, has top receivers go in the first round in Julio Jones, Amari Cooper, and Calvin Ridley, but they didn’t have a top quarterback throwing the ball. They had guys like AJ McCarron and Greg McElroy throwing them the ball. Both of those guys couldn’t make it in the NFL or are career journeyman backups. Alabama has never had a top NFL quarterback prospect since Nick Saban has been their head coach. They have had a lot of great skills position players, but not a top-notch quarterback prior to Tagovailoa. While it is true there were two Alabama receivers taken in the first round this year in Henry Ruggs and Jerry Jeudy. Also in Todd McShay’s early 2021 top 32 prospect list, he has Alabama receivers Jaylen Waddle and DeVonta Smith in his top 32, but those rankings are early and they could change a lot between now and next Aprils draft.

During the week, Shannon Sharpe and Skip Bayless debated about Tagovailoa. Sharpe made a point that Alabama was known for running the football in the years prior to Tagovailoa despite having receiving talent with Jones, Cooper, and Ridley. He’s right because Alabama was led by workhorse running backs like Mark Ingram, Trent Richardson, Eddie Lacey, and Derrick Henry. Alabama would be known for running the ball and pass when they had to. They were even that way in Tagovailoa’s freshman where he was a back up to Jalen Hurts, but then when Hurts was benched when Alabama was trailing Georgia in the 2018 National Championship. That’s when Tagovailoa took off and sparked Alabama to a come from behind win in overtime. Hurts wasn’t the passer that Tagovailoa was and never got his starting job back. He ended up transferring to Oklahoma this past season and revived himself as a passer, but why couldn’t he do that at Alabama? He had Ridley and Jeudy to throw the ball to, but never put up numbers like Tagovailoa until he left. Maybe it was coaching because he went to Oklahoma and got his career on track to the point where he was a 2nd round pick in this year’s draft. 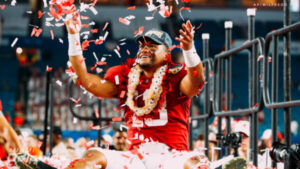 Bayless in his debate with Sharpe always seems to bring up how he didn’t play well in some of the big games, such as the SEC Championship game against Georgia in 2018 and the game against LSU this year where he completed 21 of 40 passes. However, he threw for over 400 yards and 4 touchdowns to keep them in the game. He seems to try to knock every little thing about Tua. Look you want to talk about big games, Peyton Manning never beat Florida in his college career at Tennessee and that didn’t hurt him in the NFL. Manning is a first-ballot hall of famer. Bayless always compared Tua to this year number one pick Joe Burrow, who came out of nowhere this year to lead LSU to the National Championship and on the way topped Tua and Alabama. Burrow had a great year and I won’t dispute what he did, but he only had one great year where was he before this year? He was sitting on the bench at Ohio State and couldn’t beat out JT Barrett or Dwayne Haskins. Were those quarterbacks better fits for Ohio State coach Urban Myer? Who knows, but he never saw the field. At LSU, they also have a full cupboard of skill position players. Burrow had two guys drafted in the first round in wide receiver Justin Jefferson and running back Clyde Edwards-Helaire. He also had a receiver in Ja’Marr Chase, who is not only McShay’s top receiver prospect in 2021 but the number 2 overall player on his board at this time so Burrow had some talent as well.

It’s always the great debate sometimes was it the receivers or the quarterback that made the offense great. Look Dan Marino had Mark Clayton and Mark Duper early in his career, but after they left he was putting up great numbers without top-flight receivers. Tom Brady made Wes Welker put up great numbers when he was in New England. My biggest complaint against quarterback Kurt Warner going into the Hall of Fame was he had an inconsistent career. He was very good from 1999-201 and then he was average from 2002-2007 before finishing his career upon high notes from 2008-2009. He also was surrounded by Hall of Famers like Marshall Faulk and Isaac Bruce. He had a few others who will or may get into the Hall of Fame in Larry Fitzgerald, Torry Holt, and Anquan Boldin, but that shouldn’t diminish what he accomplished you either can play or not.

Tagovailoa is one of the best quarterback prospects I’ve seen from an ability standpoint to come out in the last 10 years. His throwing accuracy, power, and ability to read defenses is the best I’ve seen. The Miami Dolphins have had a lot of quarterbacks since Marino left and the biggest issue was throwing the ball with accuracy and Tua is the best I’ve seen. He puts the ball where it needs to be where the receiver can make a big play whether it be a slant pass or a go route Tagovailoa can make throws that a lot of quarterbacks can’t make. Does he have the biggest arm? No, he doesn’t. Is he the tallest quarterback? No, but neither is Drew Brees and he is a first-ballot Hall of Fame player, who the had a chance to get not once but twice and they have been paying for that mistake. The biggest issue with Tagovailoa is his durability because he’s recovering from a broken hip he suffered last, but he also had two tight rope procedures for high ankle sprains in both ankles. That’s the only thing that concerns me honestly. I don’t care who he had to throw the ball to because it comes down to whether you can play or not at the quarterback position. To me, that’s all that matters and I don’t want to nitpick his college career because he had some NFL talent. 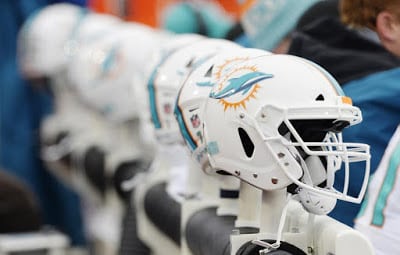 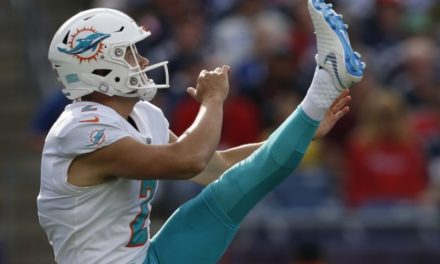