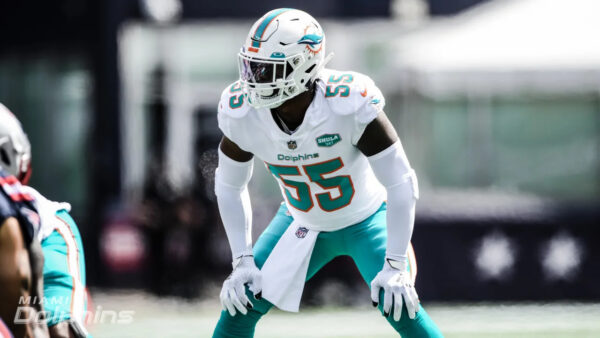 If you tuned into the week 1 game on Sunday, you saw a lot of what you were used to seeing over the past 20 seasons. The good, the bad, and the ugly. The Dolphins dropped the season opener to the Patriots by a final score of 21-11. In a COVID filled world, some things didn’t change. The Patriots are still good, well-coached, and beat the Dolphins at Gillette Stadium. There was doubt, hope, and disgust by Dolphins fans watching around the world, Sunday. Fans came into this game blind since there were no pre-season games, live-tweeting by Dolphins writers, or much at all about the team. The Dolphins were supposed to have a brand new defense that could stop the run and shut down the passing game, a new offensive coordinator that could elevate Ryan Fitzpatrick’s play, and newfound confidence playing in a supposedly “wide open” AFC East. None of those things came to fruition. The Dolphins looked like, well, the same old Dolphins on Sunday. With all of that being said, it is still way too early to hit the panic button on this team.

The Dolphins got absolutely bullied in the running game on Sunday. The Patriots seemed to get whatever they wanted on the ground and it felt like they never passed the ball. New England rushed for a total of 217 (!!) yards in week 1 and made the Dolphins look lost on the field. 126 of those 217 yards came against Miami’s nickel and dime personnel packages. The remaining 97 yards came when Miami brought heavier personnel on the field. Cam Newton was the Cam Newton we know him to be and that shouldn’t have been a surprise to Miami. It seemed like the Dolphins threw out all game tape on Newton and had no idea what to expect from him. Miami defensive ends and linebackers were hesitant to commit when the Patriots ran their zone-read. Newton ran the ball 15 times for 75 yards and two touchdowns. His 15 rushes were the second-most attempts in a game in his career. Furthermore, it was his 7thgame with multiple rushing TDs and a top-10 rushing performance for the former MVP. The Dolphins loaded the box on obvious running downs and the Patriots were still able to rip-off chunk plays and convert 1stdowns with ease. The run defense of the Dolphins seemed to be unprepared for this style of play from Newton and the Patriots. The Dolphins have always struggled against mobile quarterbacks and Sunday proved that yet again. It doesn’t get any easier for Miami the rest of the way. The Dolphins will need to contain Cam Newton a second time, Josh Allen (2x), Russell Wilson, Tyrod Taylor, Kyler Murray, Joe Burrow, and Patrick Mahomes going forward. The Dolphins host the Bills this weekend for the team’s home opener. It will be another test since Josh Allen rushed 14 times for 57 yards and a touchdown in week 1 against the Jets.

Continuing on this trend, Ryan Fitzpatrick was simply not good on Sunday. Before you start to wonder if it is time for rookie Tua Tagovailoa to hit the field, the answer is no. The Dolphins got blown out of their first 2 games of 2019 by a combined score of 102-10. Fitzpatrick was benched for Josh Rosen in Week 3 before reclaiming the thrown the following week. Fitzpatrick never looked back and played inspired football. On Sunday, Fitzpatrick was 20-30 for 191 yards and 3 interceptions. Although Fitz didn’t play well, 2 of those picks weren’t solely his fault. His first occurred when receiver Preston Williams slipped and fell, allowing cornerback Stephon Gilmore to step in and come down with the ball. Gilmore was a step for step with Williams and even if he didn’t slip, the ball would most likely have gone incomplete. Fitzpatrick’s worst interception came at the end of the 1sthalf after the Dolphins had a promising drive going. The Patriots were leading 7-3 when Fitzpatrick dropped back from the New England 37-yard line with 37 seconds to go. It was a great chance for Miami to come away with at least 3 points before the half but that never happened. The Dolphins and Fitzpatrick lucked out when Patriots kicker, Nick Folk, missed a field goal to end the half. All in all, Fitzpatrick had untimely interceptions and couldn’t get the Dolphins offense in motion until the 4thquarter. Ryan and the Dolphins offense will need to shake off the cobwebs before Sunday since the Bills put up 37 points in week 1.

The Dolphins got the better of New England in only a few categories Sunday. Those consisted of passing yards, sacks allowed, and penalty yards. The rest was owned by the Pats. The Dolphins continue to struggle on 3rddown where they were only 4/11. They lost the turnover battle and trailed New England in time of possession by nearly 10 minutes. The Dolphins also only rushed for 87 total yards and used 4 different backs. On Sunday, the coaching and play calls were subpar.  Newly acquired running back, Matt Breida, wasn’t seen for a handful of series to start the game and only had 5 attempts for 22 yards. Free-agent signee, Jordan Howard, had 8 attempts for 7 yards and was out-snapped by Chandler Cox. Second-year back, Myles Gaskin, led the team with 9 attempts for 40 yards. In my opinion, the carries were split up too much and didn’t allow any player to get into a rhythm. As for playing time, Nik Needham played zero snaps on Sunday after a very impressive 2019 season. Jamal Perry took his spot and played 31 snaps for the Dolphins defense. Another poor performance Sunday came from The Dolphins playmakers and their inability to get open. Star receiver, DeVante Parker tweaked his already nagging hamstring injury and could not finish the game. Preston Williams was given a 5.2-yard cushion at the line of scrimmage but was only able to get 1.6 yards of separation at the time of completion/incompletion. Gesicki had a cushion of 3.8-yards and was only able to get 1-yard of separation throughout the game. The Dolphins need their weapons to be able to put up points and a change in the run game plan might help jumpstart the team. 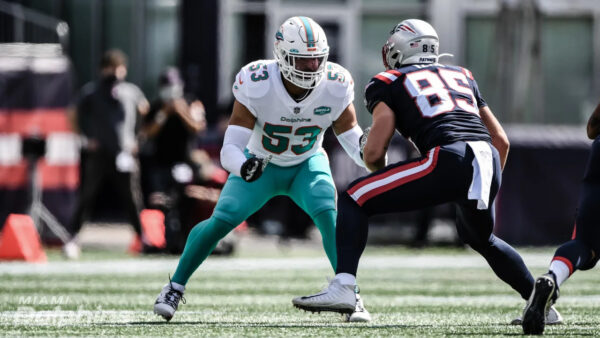 Most of the bright spots in Sunday’s matchup were individual performances. Christian Wilkins, Jerome Baker, Brandon Jones, Austin Jackson, and Solomon Kindley all had strong outings. Christian Wilkins proved why he was a first-round pick and started his sophomore season on a high note. Wilkins was the Dolphins highest-graded defender in week 1 with six total tackles (2 for loss), two passes defended, one sack, one QB hit, and a few pressures. Jerome Baker led the NFL on Sunday with 16 tackles, which was also a career-high. Baker sacked Cam Newton early in the game and then forced a huge fumble when he stripped N’keal Harry at the goal line resulting in a touchback for Miami. Next, Brandon Jones was one of 5 NFL players to have double-digit tackles in an NFL debut since 2016. Jones had 10 tackles (7 solos) and proved to be another solid draft choice of Chris Grier. Staying on the rookie train, left tackle Austin Jackson and right guard Solomon Kindley made very impressive debuts. On 38 pass-blocking snaps, Austin Jackson allowed 0 sacks, 0 QB hits, and 0 hurries. Jackson kept Fitzpatrick’s blind side relatively clean and Dolphins fans would love to see that continue. What could be the most impressive part about all of the rookie performances was what that they did it against a Bill Belichick led team. Coach Belichick is known for exploiting your weak points and he was well aware that Miami was starting two rookies on their offensive line. The two rookies held their own and proved their worth on Sunday.

Besides individual performances, there are still reasons for optimism for Miami going forward. Rookies seemed to shine which means the front office and coaching staff are doing a good job with these new players. The Dolphins still had a fighting chance to win the week 1 matchup even after not playing up to their potential. Dolphin fans should not press the panic button just yet. It is a very long season and the team is only 0-1. If this trend continues for a few more weeks, then it might be (Tua) time to start worrying. 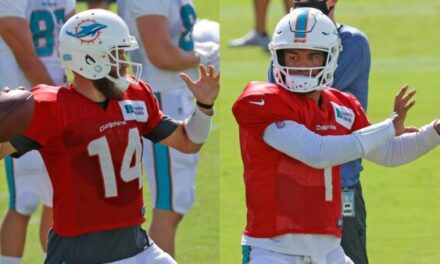 Quarterback Change is Coming But When? 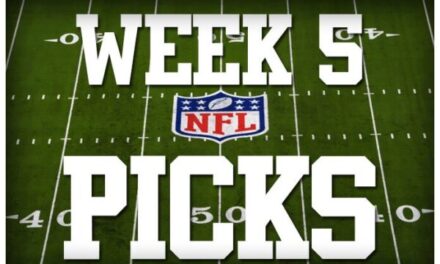