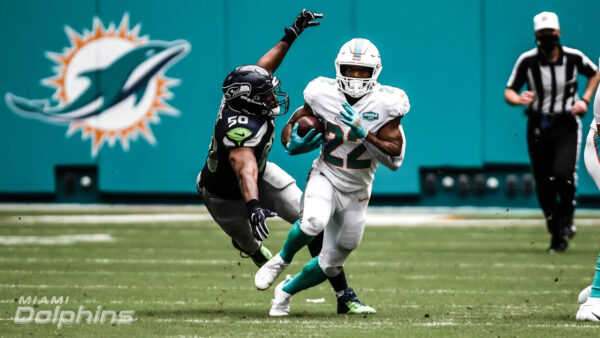 Tough loss against Seattle on Sunday. Like so many Dolphins games, it was just close enough to get your hopes up and just tragic enough to leave you saddened by the end.

Much like the first two weeks of the season, Miami managed to keep the game tight until late when things finally unraveled and the better team pulled away. If there’s one piece of good news, it’s that a win was likely never in the cards against the Seahawks, one of the hottest teams in the NFL.

That being said, a loss is a loss and this game was winnable for a good while.

Now falling to a record of 1-3, the Dolphins have some work to do in order to get the season back on track as the schedule begins to lighten up soon. With that in mind, let’s take a look at some reactions and overreactions from Sunday’s game against the Seahawks. 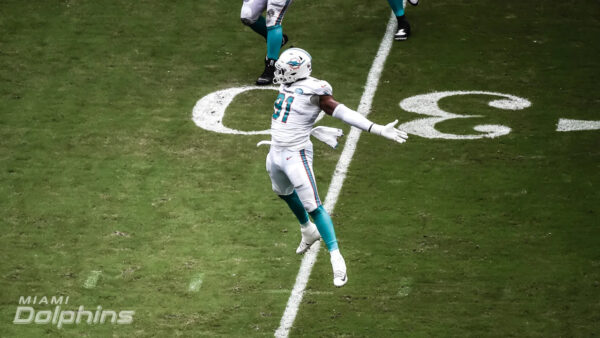 — End of the first-half TD looms large: With less than thirty seconds left in the first half, the Dolphins trailed by only one point. If you blinked at right about that moment in the game, you would have opened your eyes to the Seahawks suddenly enjoying an eight-point lead headed into the half. What happened?

Another coverage bust, something that’s happened too often this season.

Also concerning is that Dolphins fans have seen this story before — busts and miscommunication in the secondary have been commonplace for the Dolphins defense dating back to before Flores’ time as head coach.

With only twenty-nine seconds before the half, Russell Wilson took his team all the way down the field to put six on the board. The key play was a deep completion up the left sideline made possible by a gaping hole in the secondary left open by Noah Igbinoghene and Jamal Perry.

Headed into the fourth quarter the Dolphins trailed by only two, but without that last-second touchdown to end the first half, they would have enjoyed a lead. Would that have made a difference in the game’s outcome?

— Another forgettable week for Noah Igbinoghene: As a rule, I hate when people prematurely label rookies as either home-run hits or busts, and Igbinoghene is a great example of this. During camp and even at moments during the season (like last week against the Jags), people have claimed that the rookie has looked like a fantastic pick at the tail-end of the first round.

Now, the opposite is also true. He’s only a rookie, and after a measly four games, it’s far too early to call him a disappointment. One thing he does have, however, is an inexplicable tendency to stop gaining depth with his man and peek into the backfield as if he’s always expecting safety help.

That would be fine, except the safety isn’t always there.

In fact, the safety has quite often not been there.

The deep completion to set up Seattle’s touchdown just before the half demonstrated this when Igbinoghene started going deep with a streaking receiver, only to turn his head into the backfield and attack a shallower part of the field. He got away with a similar play last week against the Jags while they were threatening to score.

Igbinoghene’s talent is undeniable and the effort is there, but improvement needs to come soon. He needs to learn from his mistakes and the secondary as a whole needs to communicate better. Perhaps more than anything, this secondary needs Bryon Jones back.

— Failure to finish drives on offense: Above all else, this cost the Dolphins the game on Sunday. Miami found itself in the red zone three times, but only found paydirt once on a Fitzpatrick scramble that came when the game was well in hand for Seattle.

Jason Sanders has looked great to start the season and was a perfect five-for-five on the day for field goals, but the Dolphins need to start calling his number far less on field goals and more on extra-point attempts. Whether this means more aggressiveness with fourth-down attempts on the plus side of the field or more creative play calling in general, Chan Gailey needs to find a way to get the ball in the end zone.

The offense was able to sustain drives all day and ran a whopping 68 plays, but points were too far and few in between for the number of yards the team gathered up.

They finished with 415 and moved the chains 25 times, but came away with only 23 points. Against a team like the Seahawks, field goals only delay the inevitable. Sunday was proof, as the Seahawks eventually pulled away and sealed the game.

— Where is Preston Williams? Maybe it’s because I have him in fantasy football and put some money on him this week, but what’s happened to the promising UDFA we all knew and loved last season?

Williams had only a single catch for fifteen yards on the day, plus a two-point conversion that came too late to really matter.

Without seeing the from this week’s game tape I can’t diagnose exactly what the issue is for the second-year wide receiver, but this is more than a one-off problem now. More than just a matchup issue. Through four games Williams has only six catches for 89 yards.

That’s basically one catch for eighteen yards per game (and about three fantasy points per game for this sucker). In an odd twist, he has two-two point conversions, but the dropped potential TD against the Bills offsets any credit these two catches give him for the season.

On the game broadcast, you generally can’t see receivers running their full routes, but something is wrong. What’s most concerning is that his target share has dropped since week one as well. Either he’s not getting open or perhaps he’s not fully recovered from last year’s ACL injury.

In any case, Williams needs to get back on track. Otherwise, the offense has got to improve with or without him.

— Previous thinking that Jerome Baker and this LB unit are solid: Let me make something clear: I don’t hate Jerome Baker. And to be honest, his name wasn’t called in a negative way much at all on the broadcast against the Seahawks. My issue with him is that he’s supposed to be a difference-maker in the middle of the field — always around the ball, an athletic playmaker in both pass and run defense.

Have we seen that so far this season?

He had a nice sack week one on Cam Newton, but since then he’s been awfully quiet.

He’s supposed to be a guy who’s name is called often, as a result of positive plays.

I’ll defer to fellow writer Kevin Dern on this one but largely he’s struggled against the run, with the Bills game being the best example of this. He gets stuck on blocks. He hasn’t been sure enough as a tackler. He hasn’t been around the ball enough overall, in pass coverage and otherwise.

That’s why Baker’s struggles fall into the “overreaction” category today — not because I’m overreacting about how poorly he’s played, but because of all the hype, the fan base surrounded him with prior to a game being played this season. He’s got to be better.

The linebacking corps as a whole has underwhelmed this season, and this week Seahawks running back Chris Carson averaged five yards per carry. The interior defensive linemen haven’t done the linebackers a ton of favors, but Baker and Elandon Roberts have been largely disappointing so far. On Sunday, Russell Wilson dropped in an awful lot of balls just behind the linebackers in zone coverage. Of the group, only Kamu Grugier-Hill and Kyler Van Noy have done enough.

Improvement from this group is necessary moving forward this season, otherwise, a high draft pick in 2021 might get allocated here. 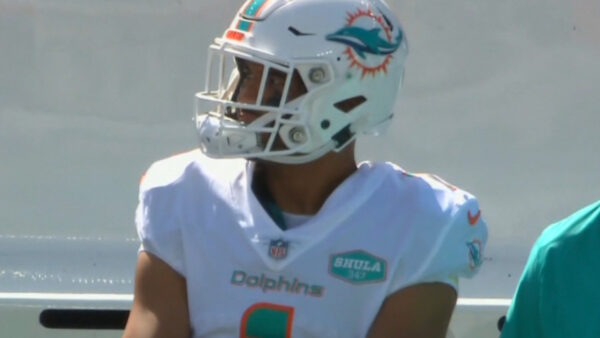 — It’s Tua time! Hold your horses, Dolphins fans. I’m not saying that there’s no chance we see the rookie next week, but I am saying that it’s still unlikely. Going hand-in-hand with this overreaction is thinking that this week’s loss alone warrants moving on from Ryan Fitzpatrick. There’s no denying it — he didn’t have a great game despite moving the offense up and down the field for most of the day.

He forced a few balls into traffic.

He couldn’t toss a touchdown when the team needed it.

The second pick was especially costly.

But here’s the thing — if you chalk up Sunday’s performance under the ‘Bad Fitz’ category, that leaves the Good vs. Bad Fitz score for the season at two to two; Pats and Seahawks game on the Bad side, Bills and Jags game on the good side. This is just who he is.

Fitzpatrick has been this way his whole career — a guy who dances on the knife’s edge between Fitzmagic and Fitztragic, a gunslinger who waffles from zero to hero week-to-week.

And you’ve heard it before, but he’s a leader on this team. The guys love him. Coach Flores loves him.

I truly believe that for now, he’s still your starter.

If the wins don’t start coming with more frequency, however, the clock will keep ticking as Tua waits in the wings.

— Thinking that Flores is slumping or that the season is over: This is my weekly soap-box time where I tell you to calm down because the world isn’t ending. The season isn’t over because the Dolphins couldn’t beat one of the best teams in the league backed by the dude who’s probably leading the MVP race at the quarter-point of the season.

Miscommunications on defense and inconsistent play-calling on offense have been valid concerns so far this year, but I’ll again remind you that this team is still finding its form. If you’re getting tired of me saying that, however, know that I understand.

I’m getting a little tired of writing it.

Through four weeks the excuse has made sense because the Fins have at least been competitive in their losses, but as the schedule softens up there will be no more room for excuses. No more moral victories. Only wins and losses and hard, honest assessments on how this team needs to get better for the monumental year for this franchise that will be 2021.

Brian Flores has plenty of things to clean up with his team, and improving starts with him and his staff. Seriously, he’ll tell you as much.

For now, cut them some slack for having such a young, unfamiliar group. If things don’t get better as the schedule lightens up and the season moves along, however, you’ll have every right to hold them accountable. 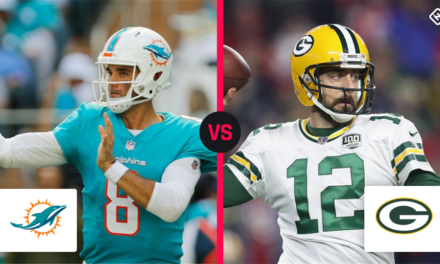