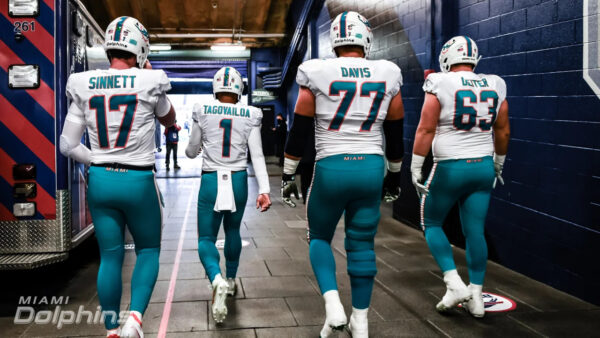 The AFC East was turned upside down in 2020, and 2021 could bring more change to the division. In 2020 we saw the Bills return to the top of the division, and the Dolphins take a big leap out of the AFC East basement to win 10 games. We also saw the Patriots fall from atop the perch they have been on for many years and fall hard. And the Jets…..well, are the Jets.

But could that all change in 2021?  It may not be as far-fetched as you think.

Let’s start with the Buffalo Bills, who are coming off a 13-3 season and a trip to the AFC Championship game. While on paper, they are the odds on favorites to repeat as division champs in 2021, it will be more challenging for them next season. They go from being the hunters to the hunted. And improving on a 13 win season will be difficult. They enter the offseason over the salary cap and will have to trim about one to two million off their current roster by the start of the new league year. The odds are they won’t be active players in free agency.

Don’t get me wrong, the Bills are still an excellent football team and will be players in the AFC next season. But while the rest of the division improves and catches up to them, could the Bills take a small slide backward in 2021?

The New England Patriots had a forgettable 2020 season and would like to put behind them rather quickly and move on from. The #1, #2, and #3 issue they have to address heading into 2021 is the quarterback position. They do head into the offseason with the 3rd most salary cap space in the entire NFL, and they will be active shoppers come free agency. Let’s not forget the Patriots had the most players “opt-out” in 2020 due to COVID. With those players’ return in 2021 and one would assume many new faces, the Patriots might not be far away from being “back” as some think….or hope.

But it truly does all come down to the quarterback position, and if New England is unable to find a capable quarterback, their 2021 season will look much like their 2020 season.

J-E-T-S….Jets Jets Jets. They are the butt of the joke around the league and have been for decades. But could they have hit the jackpot with some recent hires and recent moves? Hiring Joe Douglas as GM was a smart move. Trading Jamal Adams (who is highly overrated) and getting two first-round draft picks was a great move. Hiring Robert Saleh as head coach looks to be a good move (granted, he hasn’t coached a game yet). The Jets situation reminds me of the Dolphins situation from a couple of years back. Hire a good football man as GM, hire a football lifer as your head coach, and stockpile draft picks and salary-cap space.

And the Jets, with multiple first-round picks (including the 2nd overall pick of the draft) and the second-most salary cap space heading into the offseason, look to reshape their roster overnight. Will they go worst to first? NO! Can they make big giant leaps rather quickly as the Dolphins have done in recent years? Absolutely!

The Dolphins are back. Coming off a 10 win season, they will be the sexy and trendy pick of many “experts” heading into 2021. They are closest to knocking the Bills off from the top spot in the AFC East from a talent level. They hold two first-round draft picks, including the draft’s 3rd overall pick. And they enter the offseason with in or around $25 million in salary-cap space. The Dolphins look to continue to add talent to their roster this offseason. Yes, there is an outside chance they can use some of their draft capital to land a Top 3 quarterback in Deshaun Watson via trade, which will only speed up this process of the Dolphins returning to prominence.

2020 was a year of change in the AFC East, and 2021 should bring more change. I wouldn’t expect to see the standings come out in the same order next season when all is said and done.

DT Daily for Tues, May 1st: Dolphins Draft Grades and No Excuses for Matt Burke in 2018