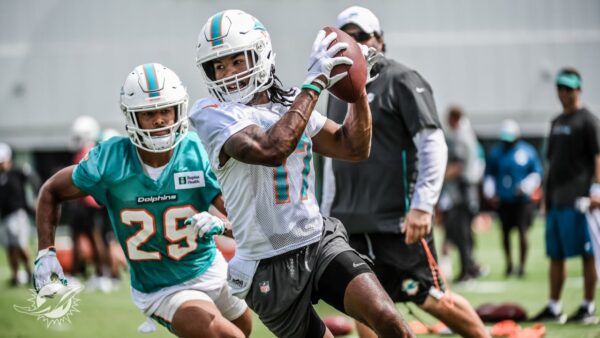 The Miami Dolphins wrapped up their practice at Hard Rock Stadium Wednesday, their 2nd full practice in pads. Although the rain has been heavier the last few days, conditions today on the field were quite ideal— lots of sunshine and the wind was not a factor.

As far as quarterbacks go (I’m only talking about Tua Tagovailoa and Jacoby Brissett), both of them looked sharp today. They went through their progressions, took chances downfield, fit the ball into tight windows, and put the ball where only the receiver could get it. The ball location was on-point today. There may have been an interception or two thrown by quarterbacks, but nothing drastically ugly or worrisome today.

Solomon Kindley was still working with 3rd string unit. It’s been a mystery how this guard, a standout last training camp and season in which he started 13 games, has fallen from the starting unit. My theory is perhaps Kindley has some “bad” weight to him. He’s a big boy, but his body type is different from the other lineman. He doesn’t just look big; he looks heavy. Again, just a theory, but something that perhaps coaches want him to change.

Today’s starting unit mostly consisted of LT Austin Jackson, LG Liam Eichenberg, C Michael Deiter, and RG Robert Hunt with a new face at right tackle — rookie Larnel Coleman. Coleman was brought on by the Dolphins in the 2021 draft as a 7th-round pick. Versatile veteran Jesse Davis was playing at the position before Coleman’s appearance this morning.

Coleman faced off against Vince Biegel primarily. He held his own for the most part. But towards the end of practice, Biegel eventually starting using a burst of quickness and speed and started getting the better of Coleman. Coleman showed some of that 7th-round status after starting strong today.

Biegel had some pressures today, to say the least. Welcome back, Vince.

Colin Cowherd is back to sounding like a broken record trashing Tua today on the air. https://t.co/8X4XndXndO

Myles Gaskin and Patrick Laird got the bulk of the work today. I can’t say any of it was impressive when running between the tackles. The defensive line, led by Christian Wilkins and Raekwon Davis, was only allowing short gains today. Gaskins and Laird contributed using their hands for dump-offs at times.

In 7-on-7’s, Tua threw deep down the sideline to Gaskins. Fitting it in between the corner and safety and hitting Gaskins in stride.

DeVante Parker had a nice gainer on a dig route, sat inside zone, 15-yd.

Albert Wilson continued to make noise today. Aside from one bad drop on a short comeback route, Wilson was making his presence known today. Using his quickness to get open, he made noise in the short/intermediate game. Tua had a strike to Wilson over the middle on what appeared to be a slant, hitting Wilson in stride.

There was one play that could’ve been a hookup but went horribly wrong for Tua and Wilson. Tua got picked off by 2nd-rounder Jevon Holland on an intermediate throw to the sideline. Wilson was the target cutting to the outside, but Tua overthrew him due to pressure by defenders; the ball was outside of Wilson’s reach and was intercepted by Holland.

If Wilson is a favorite of Tua, then Allen Hurns must be a favorite of Brissett.  Both seemed to be finding each other today while playing with the 2nd-team.

Hurns almost hurt himself today after he made contact with a defender deep down the sideline trying to catch a well-placed deep ball by Brissett. Hurns was hurt on the play, stayed down for a bit, and gathered himself to walk off on his own power. Eventually returned to the field for RedZone drills.

Later in practice, 2nd-team scrimmage, linebacker Shaquem Griffin jumped offsides, the whistle blew, but Jacoby Brissett decided to keep the play alive and found an open Allen Hurns deep for a big gain. It didn’t count, but nice to see.

The returner battle continues to rage on. Jakeem Grant, Jaylen Waddle, and Jamal Perry all taking turns. Grant left practice with what could be an injury, or perhaps coaches decided to give him a breather. But he didn’t return. If it was an injury, it wasn’t an injury that stood out to the public eye.

Michael Palardy has a leg, folks. He had multiple punts over 50-yds and did a decent job of getting them to land inside the 5-yard-line. He was even punting balls towards the sideline that were marked inside the 5.

Noah Igbinoghene got beat deep twice today by wide receiver Isaiah Ford. Once, earlier in practice on a post, and again, later in practice down the sideline. Brissett was on both of the throws. To put this in perspective, Igbo got roasted by a WR who runs a 4.7 40-time and has been waived, cut, and traded away by this organization since being drafted in 2017. Hurns also had his fun with Igbo at times today. 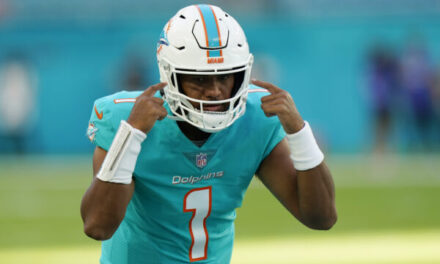 Dolphins Defense Improving, Can Offense do Enough vs Jets? 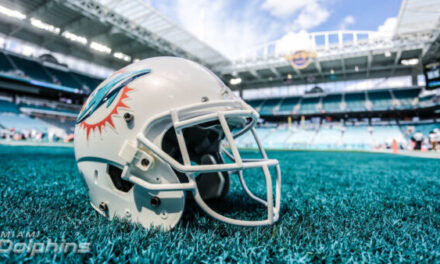 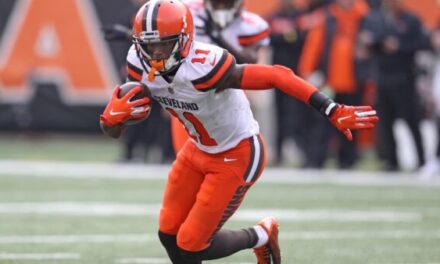