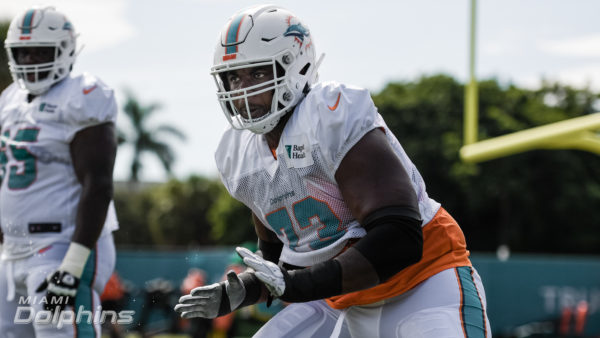 The weakest part of the Miami Dolphins offense for the last few years and beyond has been their offensive line. For whatever reason, the Dolphins can’t get it right finding a consistent starting offensive line. It’s been for lack of trying. The Dolphins have invested a lot of their draft capital in recent years drafting offensive linemen. Some will say they drafted the wrong players, which could be true in some cases. However, it’s also possible that having four different offensive line coaches in the last three years hasn’t helped either. Each line coach probably taught things different from blocking schemes, technique, etc. New head coach Mike McDaniel, unlike Brian Flores, is known for offense, and the hope is now that a certain scheme he brings will help revive some of the young linemen they have.

McDaniel is bringing a new zone-blocking scheme to the Dolphins offense, and it might potentially suit these offensive linemen better; at least that’s the hope. Is it possible McDaniel might blow up the whole offensive line? Yes, it is. With free agency around the corner, it will be interesting to see what interest the Dolphins will have in the offensive line. The zone blocking scheme requires more athletic linemen and not bigger linemen, unless they are more athletic for their size. This offensive coaching staff, for the most part, has a history of developing offensive linemen, and they know the type of linemen needed for their system. They will have the next month or so to look at the current roster to see if there are some players worth keeping to develop.

Will Stephen Ross be forced to sell the Dolphins? - Powered By PickUp

The Dolphins, last April, traded up in the 2nd round of the draft to get tackle Liam Eichenberg. He played right tackle to start the season before being moved back to left tackle, which was his college position. He struggled as a rookie, which is expected; not every player comes in and plays well right out of the gate. There is a learning curve that comes for most. With the Dolphins trading up to get him, it’s doubtful they will give up on Eichenberg. The question will be, is he the best suited to play right or left tackle or perhaps be moved inside to guard? That will be interesting moving forward.

Austin Jackson is another young player the Dolphins invested a high pick in. He was drafted in the first round in 2020 and was considered a project by many draft experts. Meaning he was a talented player but needed to be coached up. It couldn’t have helped having different line coaches. In his two seasons, He started the 2020 season playing well but then had an injury that sidelined him for a month and came back and struggled. Those struggles carried over to this year. Jackson was moved from left tackle to left guard midway through the season, and he had mixed results in his play. He is an athletic lineman, so maybe this zone blocking scheme will help get the most out of him, but, just like Eichenberg, is he a guard or tackle? Does the new coaching staff believe they have a player worth continuing to develop?

Michael Deiter will be coming into his 4th season since being drafted in the 3rd round in 2019. He started every game at left guard his rookie season and frankly didn’t play well. In 2020, he was a reserve and had his starting spot overtaken by free agent Erik Flowers. This past season the Dolphins moved him to center to compete for the starting center spot, and to Deiter’s credit, he won the job, and some will say he didn’t have much competition, but the bottom line is he won the job. He played decently at center despite missing almost two months with an injury. Like Eichenberg and Jackson, the question will be, does the new staff want to keep around for the 4th season?

The one who I don’t think will be around is Solomon Kindley. The reason I say that is 6’4 and over 330lbs. He’s more of a mauler of a lineman. If he’s going to have any chance to stick around, he will have to get in better conditioning, lose at least 20lbs, and show he can move for a big offensive lineman.

The one who is definitely a keeper of the group is Robert Hunt. Hunt finished the 2020 season at right tackle and did a good job. Then he got moved to right guard, and he played well. The question is will he be at guard or tackle? Either way I believe he will succeed.

The Dolphins have a veteran in Jesse Davis, who played right tackle and struggled all season long. I think Davis will be let go before free agency. He’s been with the team since 2017, and he’s a fine player, but the Dolphins need a more consistent force on the line. He’ll probably have to earn his spot on the roster if he comes back.

The Dolphins should be aggressive in free agency, looking for offensive linemen because they need a veteran and someone who can impact the line to go with the younger players and help mentor them. If the Dolphins do a clean sweep on the offensive line, that will show how this new coaching staff feels about the players they have. My hope as a fan is that the new staff will work with some of these players to turn their careers around. Coaching in the NFL does matter. Now it’s time to see what this new offensive staff can do with this group. 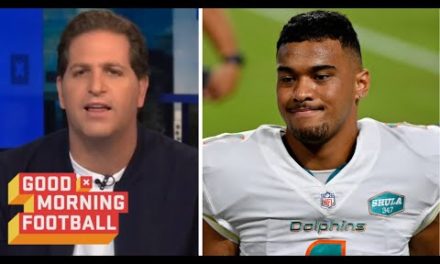 GMFB: Is This a Make or Break Year for Tua? 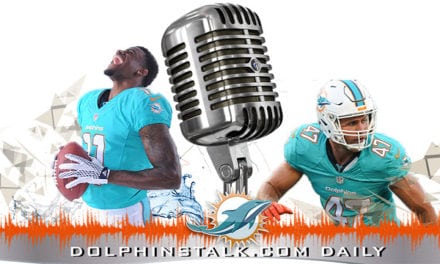 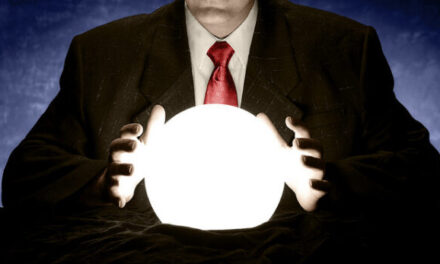