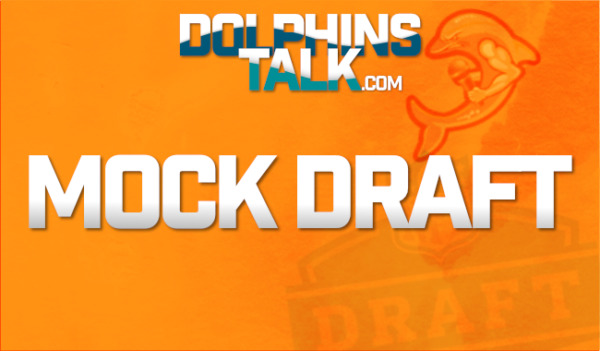 Last week I released my Miami Dolphins Mock Draft Version 1.0, and the feedback I received was mixed. Many loved it while others did not. Some question why I had Miami taking a running back and a cornerback when they only have four picks. As we sit today in mid-April, I still stand by as those are two of the most significant needs on this team. As I said in my first mock draft with pick #102, the odds of Brian Asamoah being on the board moving forward at that spot would be slim as he is skyrocketing up draft boards, and in this mock, that is what happened as he goes before the Dolphins are on the clock. So, the strategy is changed in this version of my mock draft, but the needs are the same.

Here is Version 2.0 of the 2022 Miami Dolphins Mock Draft without any further ado.

The Dolphins have a need at center both in the short term and long term. Zach Tom is someone who may not be ready in 2022 to win that job, but after a year in an NFL weight room and as a backup would be poised to take that job over in 2023 and hold on to it for many years to come. A nice addition to drafting Zach Tom is two of his three years at Wake Forrest; he started at left tackle and was very good there. He doesn’t have the measurables to play offensive tackle in the NFL and he will be a full-time center in the league, but in a pinch, there is position flexibility here which is nice to have.

The positives with Zach Tom is he is an elite pass blocker both at center and tackle. He is fluid with his movement and can block in space and on the move, which is a perfect fit for the wide-zone running scheme Mike McDaniel will be running in Miami. He is a high IQ player and able to call the line assignments as well. The downside is his size. He is currently too slender for an NFL starting center and needs to build up his trunk and base. Plus, he doesn’t play with the aggression and violence you like in a starting caliber interior offensive lineman. The positives outweigh the negatives there and if he can bulk up come 2023 he is the type of player who can be the Dolphins starting center for many years to come. 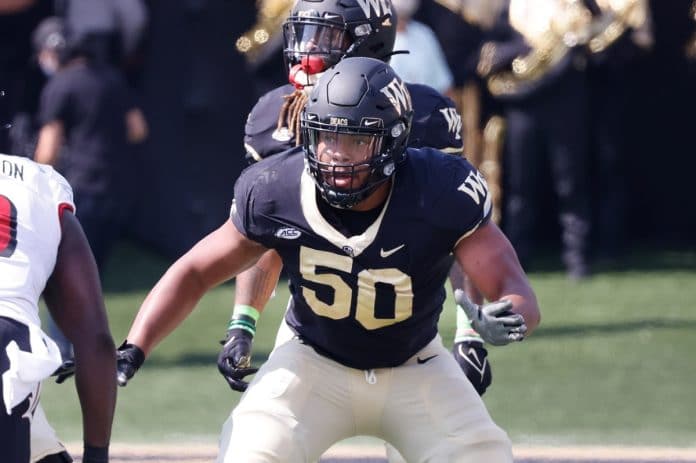 I had him with this pick last week in Mock Draft version 1.0 and I am not changing as I think this is a home run of a pick for the Fins at this spot. I know you’re probably saying a running back in Round 4? We just signed Chase Edmonds and Raheem Mostert. True, but both of those players are on one-year deals, and beyond 2022 who knows if either will be back in Miami (Mostert signed a 1-year deal and Edmonds, a 2-year deal but its a glorified 1-year deal as he has almost no guaranteed money after 2022 and is an easy cut to free up $6 mill of cap space.)

Also, with Mostert, you cannot depend on him to give you 17 games this upcoming season. His injury history tells you that will not happen. Behind those two, you have Salvon Ahmed, who is a nice player but isn’t someone you want getting significant carries. He does have ties to this new coaching staff from his time in San Francisco, but he isn’t someone you want to see on the field much. Myles Gaskin seems like the odd man out, and I can’t see him making the 53-man roster. Also, Ahmed and Gaskin are both NOT under contract in 2023 for the Dolphins. You can make the case as of today that no running back on the current Dolphins roster will be with them in 2023. The Dolphins must add a running back in this draft to get someone in the pipeline to backup Edmonds and Mostert this year and maybe be in a 50/50 timeshare at the position in 2023.

Insert Dameon Pierce out of Florida who would bring something to this Miami Dolphins running back room they currently don’t have, a running back that isn’t reliant on speed and can break tackles with his leg power. Pierce doesn’t shy away from contact and can run through a tackle. He has excellent balance and a twitchy downfield burst. He wasn’t used a ton at Florida, which is a huge plus as there is a lot of tread on that tire, as at Florida, he only had nine games with ten carries or more. He was an excellent college player who didn’t get the ball enough in the run game with the pass-happy Florida offense. On top of that, he is a perfect (and I do mean perfect) fit for a wide-zone running offensive style. 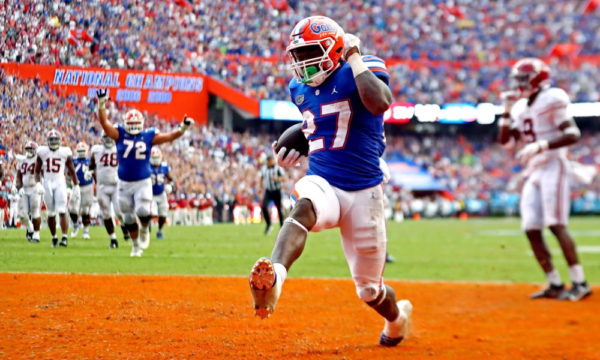 When you are in round 7, you are looking for traits and guys you can look to develop for down the road. With Carpenter, you have exactly that. He was a four-year starter at Georgia Tech but at safety. He doesn’t have the traits to be an NFL safety, though, but he does at linebacker and he has said he is moving to linebacker in the NFL. Being able to take on blockers in the super-fast NFL game will be an issue for him early on and something he will need to adjust to and work on. He also may not have the ability to read the play-action pass which could get him caught looking in those situations, and his coverage skills on the NFL level may be lacking. So, this is a project you are drafting that will need to be coached up at the linebacker position.

There are a lot of positives to work with, though. This kid can be a special teams ace right out of the gate in year one. He is very physical, and playing the run will not be an issue for Carpenter on the NFL level. He takes good angles to get to the ball carrier, and he is a sideline-to-sideline player. There is a lot to work with for a pick in the 7th round, and with the right coaching, he could be a rotational linebacker in 2023 or 2024. 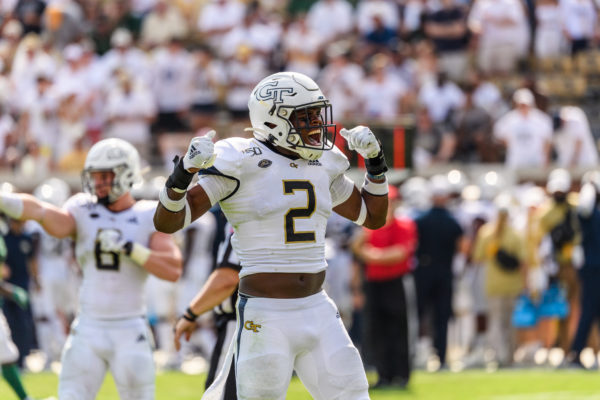 This pick also hasn’t changed since last week and Version 1.0 of my mock draft. Yes, cornerback! I know the Dolphins just broke the bank for Xavien Howard and re-did Byron Jones’s contract, and both will be in Miami for years to come. But after that, what do the Dolphins have? Justin Coleman left in free agency to Seattle. Nik Needham is a solid nickel CB. Noah Igbinoghene is a lost cause, so let’s not even go there. Miami has very little, or should I say no, depth at the cornerback position. They need to replenish that and get some youth in the pipeline behind the two veterans they have starting.

Jack Jones is a perfect fit for this Dolphins defense. He is a press-man corner who is scheme versatile and can also play zone. He can play outside corner or inside in the nickel and has had success at Arizona St in both spots. He is undersized (which is why he is here in Round 7) but has elite athleticism with fluid hips, top-notch change of direction skills, and fantastic foot quickness. He has excellent ball skills (10 career interceptions at Arizona St), and when he gets the ball in his hands, he can score and can break a big play on a run-back. He has all the skills you want in a cornerback, but he does lack size, strength, and length. He can be a backup nickel off the bat and maybe in time, and after a year in an NFL weight room, he could provide some depth behind Xavien or Byron. Jack Jones is a solid flyer here in Round 7. 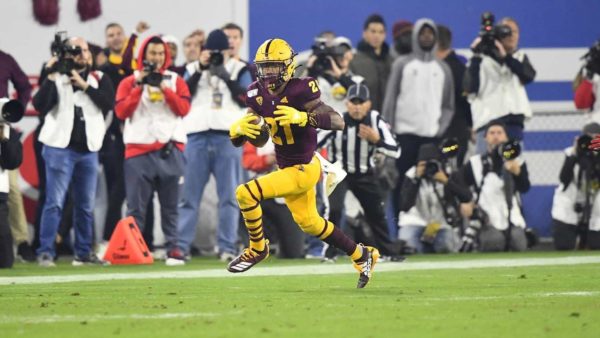 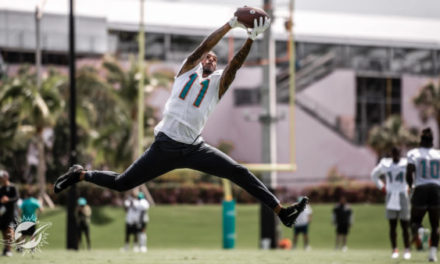 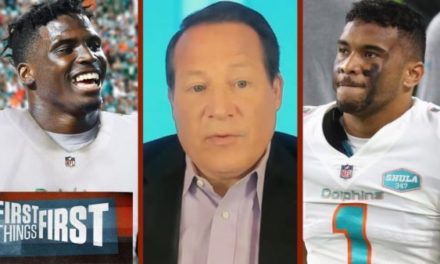 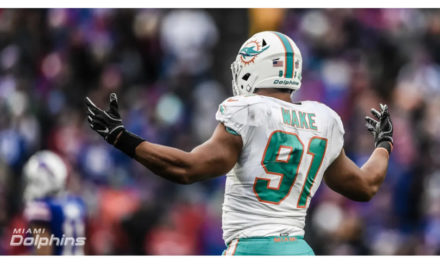 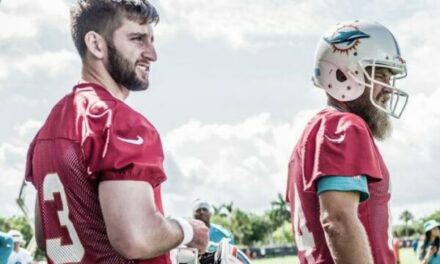