Tyreek may have Unknowingly Put More Pressure on Tua in 2022 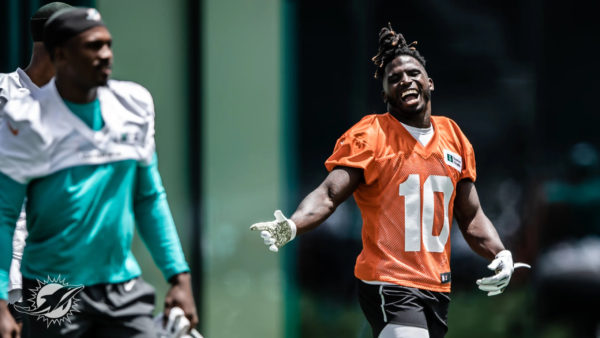 The first episode of the Tyreek Hill podcast dropped last Friday evening, and it is making headlines everywhere. Tyreek got a lot of things off his chest and ruffled a lot of feathers, mainly in Kansas City and with Chiefs fans.

One thing I think Tyreek did but didn’t intend to do is add some extra pressure onto Tua Tagovailoa heading into the 2022 season.

For those of you who may not have listened to the episode yet, Tyreek was asked how it is playing with Tua and how does it compare to playing with Pat Mahomes, who was his quarterback in Kansas City. Tyreek said, “Obviously, like I’m gonna go with 15 (Mahomes) as the strongest arm, but, as far as accuracy-wise, I’m going with Tua all day,” Hill said, adding he prefers passes to the numbers rather than trying to track deep balls.

“I love the deep ball, but guess what, though? I done expanded my game,” Hill added. “So, now I’m doing a lot more than just the deep ball now. I’m doing intermediate routes. I’m doing short routes. So, now I actually need a guy who can just get me the ball now on a dagger route, on a corner route, on a shallow cross route. You know, right now, right in my chest. So, I can do the rest. I make you look good now.”

On the surface level, those comments are innocent enough, and it wouldn’t be a big deal on many teams. In Miami, though, in 2022, with Tua, these comments will get extra attention. And it already has, as his words are being reported everywhere as the praise he placed on Tua was so over the top that people are now expecting Tua to put up Mahomes-like numbers in 2022, which Tua shouldn’t have to do and doesn’t need to do to have a successful season this upcoming year.

Tua was the 5th overall draft pick of the 2020 draft and has not lived up to expectations thus far. The two quarterbacks around him have far exceeded anyone’s expectations. Joe Burrow is coming off a Super Bowl appearance and Justin Herbet has lit up scoreboards through his first two years. Miami is often mocked for selecting Tua over Justin Herbert, as it appears two seasons in this was a colossal mistake. Such as the Jets selecting Ken O’Brien over Dan Marino in 1983.

Episode 1 of Tyreek Hill's podcast is a MUST LISTEN for all Dolphins fans. He compares Tua and Mahomes, talks about trade to Miami, his final year in KC, and much more. https://t.co/14aEKqLCe7

So, why do Tyreek’s comments add more pressure on Tua? Because Tua is fighting for his NFL life in Miami in 2022. It is a make-or-break season for Tua in Miami. Tua already had the weight of the world on his shoulders and now there is a bigger spotlight on him after this podcast.

If Tua doesn’t improve and become a borderline Top 10 quarterback this upcoming season, the Dolphins are flush with draft picks and salary-cap space to make a big move to get a big-time proven quarterback to replace him.

What Tyreek did in comparing Tua to Mahomes is re-set expectations in the eyes of many. Maybe not with the die-hard Dolphins fans who take the temperature of the team each and every day and follow every move they make online, but the expectations have been re-set nationally with Tyreek’s comments.

With Tyreek’s praise of Tua some are now expecting Tua to have a Mahomes-like season, I mean Tyreek just said Tua is more accurate than Mahomes and Tyreek wants a quarterback like Tua who can hit him on a dagger route on a corner route, on a shallow cross route.

Based on those comments Tyreek Hill should have a better year in Miami than he ever had in Kansas City? Does that sound logical? Maybe not, but that is how many are taking his comments and how the media is reporting it.

Tyreek’s praise of Tua continued as he also said, “Bro, he has a heck of an arm, bro. He’s accurate. He can throw the deep ball, and he actually goes through his reads, where people are like on Twitter like saying, ‘Oh, he doesn’t go through his reads.’ Man, this dude is that dude.”

With Tyreek’s words, Tua now not only has to improve enough to be a borderline Top 10 quarterback and lead Miami to the playoffs this season, but he also has to play on a Mahomes level? Essentially Tyreek is saying Tua is “that dude” and should be able to light it up as Mahomes did.

That is how the national media will run with it (and they already have).

That is how Kansas City fans are taking it.

That is how a segment of Dolphins fans are taking it.

The stories about to be written, the pieces on ESPN, NFLN, FOX Sports, NBC Sports, CBS Sports, and other outlets that will now compare Mahomes to Tua each week this season will be endless.

There was already going to be some comparison of the two based strictly on Tyreek’s numbers in Kansas City to what they are now in Miami in 2022. What Tyreek did is take a container of gasoline and pour it all over this debate.

Again, I believe Tyreek’s intent was pure, and it was to hype up his quarterback and show his excitement to be in Miami. And the name of his podcast is “It Needed to be Said” I just think the comparison of Tua to Mahomes would have been better left unsaid. I think the fallout from this will carry over all season, and it may cause a media circus in Miami. 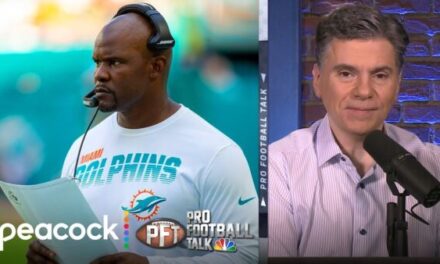 NBC: Brian Flores could be Destined for Greatness with Dolphins 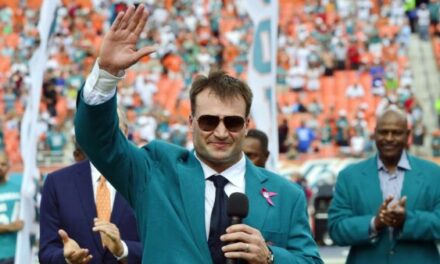