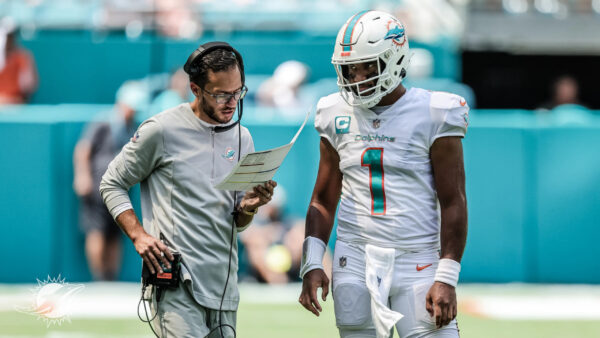 The Miami Dolphins played their first game of the season on Sunday and defeated the New England Patriots at home to move to 1-0 on the season.

As usual, the conversation among Dolphins fans was dominated by the performance of titular quarterback Tua Tagovailoa. The former Alabama signal-caller finished the game, completing 23-of-33 passes for 270 yards, one touchdown, and zero interceptions.

That was good enough to move to 4-0 against Bill Belichick, but as you know, stats never tell the whole story.

There are some changes for the 2022 season. First, I’ll be incorporating longer YouTube videos to better explain some of the plays. For the third straight season, I’ll have a weekly column diving into All-22 to better evaluate Tagovailoa’s play from week to week.

Second, I’m holding Tagovailoa to a higher standard this season. Done are the days are constantly making excuses for poor coaching, playmakers, and offensive line play. It’s a do-or-die season, and that’s how we’ll evaluate Tagovailoa for the next 16 games. We’re going to hold him to the standard that we hold some of the game’s best quarterbacks.

This was easily the best throw Tagovailoa made all day. Have to give a shoutout to Mike McDaniel’s confidence to go for it on fourth-and-7 at the end of the second half. It truly changed the game as Miami’s lead was just too great to overcome.

For Tagovailoa, this play highlights many of his best traits — middle-of-the-field accuracy and anticipation.

The video goes into a lot more detail, but to summarize. Tagovailoa throws this pass way before Waddle is open and places it perfectly on his right shoulder, allowing him to make the catch, burst through three defenders, and score a touchdown.

When Tyreek Hill makes the grand claims he does about Tagovailoa’s accuracy, these are the types of throws he’s talking about.

These in-breaking routes will be a core concept for the McDaniel offense in Miami. If Tagovailoa can be this accurate and deliberate with these concepts all season, the Dolphins will get plenty of big plays off of them.

This throw seems important to highlight because of the debate surrounding Tagovailoa’s arm strength. This throw is quite long since Tagovailoa winds up at the opposite hash and gets the ball to the far sideline fairly quickly.

Is this a rocket? No. Is it good enough? Yup. Tagovailoa doesn’t have a strong arm, and he never truly has. It was something most competent draft analysts flagged as a negative in his game when he was coming out of Alabama.

Pause the video when Tagovailoa winds up and look where Waddle is. He’s not even open yet, and Tagovailoa lets it fly.

If he can hit throws like this consistently — and hit them a little further down the field when he’s not on the opposite hash — it’ll go a long way to making his depth of target number look a little better this season.

Tagovailoa had a perfectly fine day on Sunday, but there were a couple of plays that stood out as areas where he can improve.

This one falls into the “being harder on Tagovailoa category” because there’s an argument that the pressure in Tagovailoa’s face makes it a tough rep.

However, on this rep, Tagovailoa spends way too much time waiting for the deep vertical route to open. There’s no version of this where the post route comes open, the safety has it capped with room to spare.

Tagovailoa needs to see that sooner and understand he has a backside dig route coming wide open in the middle of the field.

This isn’t an easy throw to make, especially with a defender flashing in his face, but if he came off the post sooner and flipped his eyes quickly to the middle of the field, he could’ve got it to Waddle.

Instead, he panicked just a hair early and bailed out of the pocket. Again, this isn’t an easy play, but it’s a play that separates the middle-tier quarterbacks from the upper-tier ones.

The good news is Tagovailoa can definitely make this throw. He just needs to see it a little faster if he wants to get to the next level.

This next throw highlights one of my biggest concerns with Tagovailoa’s game. He relies way too much on his pre-snap reads. He’s great at identifying beneficial matchups at the snap, and that’s a great trait to have.

With that said, Tagovailoa has a tendency to lock himself into those pre-snap reads and not come off of them despite what happens post-snap.

In this play, Hill comes in motion and has one-on-one coverage. Tagovailoa correctly identifies that pre-snap as his best matchup. Hill should win this rep, but Patriots cornerback Jonathan Jones gets paid too, and he does a good job closing the gap created by the pre-snap motion. Hill isn’t open.

Let’s pivot to the middle of the field where Cedrick Wilson is running a stop route right beyond the first down marker. Wilson is open; he wins his route early and is open late too. Wilson clearly looks unhappy after Tagovailoa’s incompletion too.

Tagovailoa has to get a little better at changing his game plan post-snap. He gets a little stuck on his pre-snap reads. This was an easy read and what should’ve been an easy completion.

This play is an obvious one, but it goes to highlight a bigger issue. Tagovailoa was way too loose with the ball in the fourth quarter of Sunday’s game.

This is an ill-advised, inaccurate throw at an important moment of the game. Tagovailoa had ten interceptions to just 16 touchdowns in 2021 and finished last season with nine fumbles. He had another one on Sunday — Connor Williams recovered it.

Tagovailoa’s ball security and decision-making just needs to get better this season. He had good ball security at Alabama, and during his rookie season, so he’s certainly capable of being smart with the ball.

Mistakes like the one above will come back to haunt the Dolphins when they play better teams this season.

The purpose of this column is to chronicle how Tagovailoa’s game changes over the course of the season. There’s no reason to panic or crown Tagovailoa after one game, but since this is the third season I’ve done this weekly column, we do have some history to pull from.

To me, Tagovailoa’s game looks exactly the same as it did last season. He’s still an accurate, quick decision maker who thrives on anticipation throws thanks to good pre-snap reads and touch in the middle of the field.

On the flip side, he struggles when defenses muddy the picture post-snap, has too many head-scratching decisions, and he’s still leaving some meat on the bone at times.

There’s no need to talk about his arm strength or ability to create outside of the pocket; those are what they are.

No need to overreact after one game, but based on the first game, it looks to be more of the same for Tagovailoa — both the good and the bad. 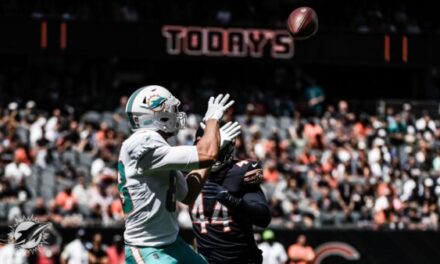 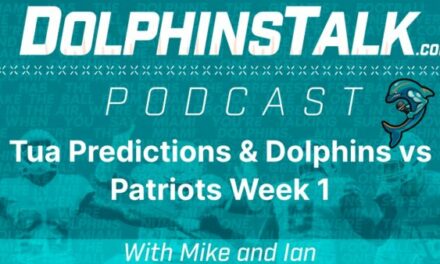