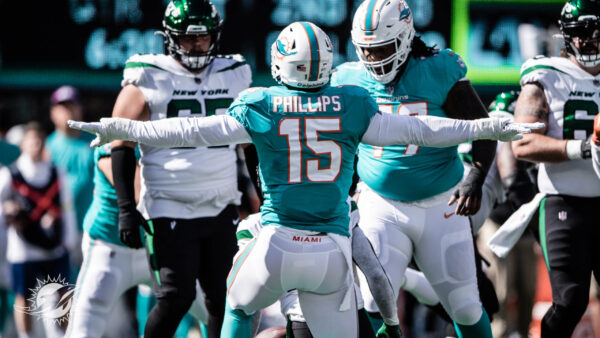 The Miami Dolphins have been a defensive-first team for the past three seasons. It’s been their calling card — the way they won football games.

However, Miami’s defense hasn’t had the same mojo so far this season. The Dolphins’ defense is giving up 25.8 points per game and 361.3 yards per game, which is good for 27th and 24th in the NFL, respectively.

Miami brought back the same exact group and defensive coordinator that held six teams to 10 or fewer points last season and only allowed 11 points per game during the team’s seven-game winning streak.

Although the unit looked much closer to their expected output against the Vikings (they gave up 24 points and 234 total yards), the defense just seems to be missing some of its magic.

So, what happened? Well, it’s a combination of factors, but most of them have one thing in common: teams have gotten smarter.

The disappearing of turnovers and the overall direction of the league, combined with a rash of injuries at cornerback, have placed Miami’s defense in a precarious situation.

Where Did the Turnovers Go?

Miami’s defense has relied on creating havoc via the blitz. The Dolphins ranked first in the NFL in blitz rate last season, and they rank fifth in blitz rate this season.

However, Miami’s defense forced 26 total turnovers last season, which ranked ninth in the NFL. They prayed on quarterbacks who couldn’t get the ball out quickly by getting strip sacks and letting ball-hawk players like Xavien Howard pray on poorly thrown passes.

Those strip sacks and INTs just aren’t coming this season. Miami has forced just four turnovers in six games, putting them on a pace to finish with roughly 12 turnovers for the season.

For reference, 12 turnovers would’ve ranked 31st in the NFL last season. 2022 is a new year, but if Miami stays on its current pace, it could potentially drop from a top-10 defense at forcing turnovers to one of the league’s worst.

Miami caused so many turnovers last season because its defense forced quarterbacks to think less and quickly get the ball out of their hands. If they made a mistake or held the ball too long, it was easy pickings for a turnover.

Miami is still speeding up opposing quarterback’s processing this season. Four of their six opponents have quicker pocket times against the Dolphins than their season average, according to Fantasy Pro’s data.

But teams have developed a solution to this problem. Anytime they see the blitz coming, they’ll just throw a quick pass to the flat. NFL teams have attempted 24 passes to the flat against the Dolphins’ defense, which ranks first in the NFL, according to Sports Info Solutions.

On those 24 attempts, 18 have gone for completions, and two have gone for touchdowns. Miami has done an okay job limiting the yards they’ve given up on these throws, but last season QBs were getting sacked first or throwing into coverage.

There’s a big difference between a five-yard completion and a sack fumble.

Don’t believe me? Look at these passing charts from this season.

Here’s every opposing QB’s Next Gen Stats chart against Miami’s defense. Anyone notice a trend? pic.twitter.com/ms2jrgnyLa

Look at all of the green dots in the flat. These are easy throws, so it makes sense they are being completed, but as we established earlier, no team in the NFL is getting attacked in this way as frequently as Miami.

These throws to the flat cause so many issues because Miami’s linebackers are being forced to cover running backs, and they just can’t cut it, specifically Elandon Roberts. Roberts has allowed 12 catches on 13 targets and has an allowed passer rating of 119.9, according to PFF.

That’s the highest of any Dolphin who has been targeted at least ten times.

The Dolphins have allowed the third most receiving yards to RBs and the seventh most receptions to RBs, according to The 33rdTeam’s Edge Tool.

The Jets used this to their advantage a ton. This isn’t a throw to the flat, but the motion confuses Miami’s second level, allowing Breece Hall to slip out of the backfield uncovered. Other teams know the Dolphins are susceptible to guarding running backs, whether a linebacker is directly responsible or not.

Buffalo Bills RB Devin Singletary had nine catches for 78 yards and one touchdown against Miami. Of those nine catches, six came on flat routes and dump-offs, which accounted for 46 yards and his touchdown.

If you’re going to be weak in one area, the short-area passing game isn’t the worst place to be weak in. It’s always good to make your opponent work for yards. Any team would trade a throw to the flat for a throw 20 yards down the field because they can rally and make the tackle.

So, the Dolphins must be one of the best tackling teams in the NFL, right? Wrong. They rank 17th in PFF tackling grade, and there isn’t much separating them from the teams below them.

So, where have the turnovers gone?

They’ve gone to the opposing team’s running backs, who are winning in coverage and with the ball in their hands. Quarterbacks have figured out where to attack Miami when they blitz, and they aren’t making as many panic throws this season.

The NFL has changed. Defenses have reacted harshly to the advent of prolific passing offenses taking over the league.

Michael Lopez, of Next Gen Stats, wrote a piece earlier this year with some interesting stats. During the past four years, cover-one rates have dropped from around 26 percent to 19 percent, while cover-two has increased to 13.8 percent from 11.2 percent and quarters coverage rate increased to 14.7 percent from 11.8 percent.

Simply put, teams are playing SIGNICANTLY more zone coverage to compensate for aggressive offenses. Well, most teams are, anyway. The Dolphins rank 32nd in two-high coverages and 20th in zone coverage rate, according to SIS.

To Miami’s credit, they ranked 28th in zone coverage last year, so they’re getting much closer to league trends this season.

However, the Dolphins have a good reason to play more zone coverage this season — they’ve been struggling in man coverage.

Last season, Miami ranked fourth in SIS’s Positive Play Percentage (the percentage of plays with the player/team in coverage that resulted in a successful play for the offense) when deploying man coverage.

So far this season, the Dolphins rank 23rd in Positive Play Percentage when deploying man coverage. That’s a huge dip!

There are a couple of reasons for this dropoff. The Dolphins have been so successful in man coverage the past couple of seasons because they’ve had the talent to match up with multiple talented receivers at all three levels of the field.

This season, Howard has zero interceptions, Jones has yet to take the field, and Needham was allowing a passer rating of 116.1 before he tore his Achilles. Holland is still good, but he’s not getting much help out there.

Jones’ injury has forced Keion Crossen into the lineup, and he’s allowing a 146.8 passer rating, which is second highest on the team.

Trying to figure out what’s “wrong” with Miami’s defense, and I have determined Keion Crossen is not Byron Jones. pic.twitter.com/SxNQaBTvLi

This play against the Bengals is a perfect example. Miami played the Bengals conservatively (by their standards) all game, but one of the few times they decided to get aggressive and leave Crossen on an island, Crossen couldn’t hold up.

Was it fair to leave Crossen on an island against Ja’Marr Chase? Probably not, but it’s the reality of Miami’s scheme. They’re going to live and die by man coverage, but in years past, their personnel allowed them to live more than they died. This year is different.

Jones might’ve done a better job against Chase, but he’s probably not coming back soon.

Injuries have undoubtedly been a key factor for Miami’s struggles, but Howard, who is supposed to be their best defensive player, has regressed this season.

He hasn’t been producing turnovers this season at all, and he’s given up five touchdowns in coverage, a 151.1 passer rating, and has allowed 20 of his 29 targets to be caught, according to PFF.

Miami has lived and died by man coverage the past couple of years, and it’s just not going as well this year. pic.twitter.com/zeB4wz9F8m

Going back to the Bengals game, this TD Howard gave up to Tee Higgins was a real red flag. Howard loses reps sometimes. He usually has one or two games a year where he struggles against a good receiver.

But the Bengals picked on Howard in this game, and this is one of the few times in Howard’s career where he didn’t find the ball in coverage.

He’s dealt with some lower body injuries this season, but Howard has popped up on the injury report plenty and still played well.

The only way Miami’s heavy-man coverage scheme can work is if their cornerbacks can survive on an island. That’s not happening this season.

The Dolphins’ defense looked better against the Vikings on Sunday, and their next five games are against teams with less-than-impressive quarterbacks (Kenny Pickett, Jared Goff, Justin Fields, Davis Mills, and Jacoby Brissett).

It’s a prime opportunity to get back on track; however, Miami’s strengths — forcing turnovers and relying on man coverage — were always fragile structures due to be shattered by some form of regression or a slight amount of bad luck (injuries).

The Dolphins made the decision to return defensive coordinator Josh Boyer and every single defensive starter from last season. Many of them are going on Year 3 as starters in the defense.

Teams know who the Dolphins are. They know their weaknesses, and they’re getting better at attacking them. Why test Holland when you can throw at Crossen or Roberts?

Defenses have to evolve, especially when their model is so reliant on offenses making mistakes and the play of a few critical defensive backs, and the Dolphins’ evolution process has to begin soon. 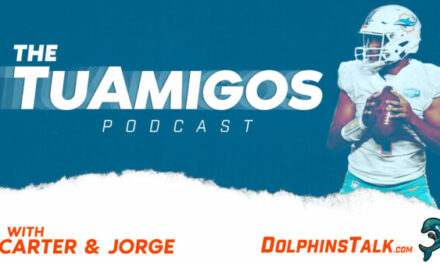 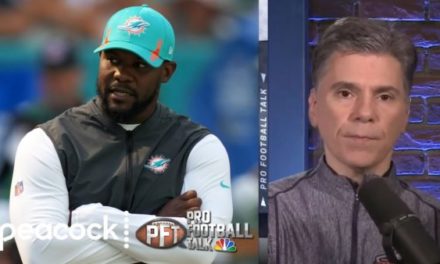