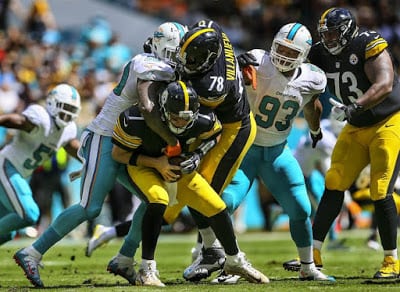 The playoffs are upon us and the Dolphins are an active
participant this year. A huge accomplishment in and of itself but now its time
to make some noise and shake things up!

Off to Pittsburgh we go to face the Steelers, and to quote
Brett Hart “If you were to give the United States of America an Enema, you
would stick the hose right here in Pittsburgh, Pennsylvania.

All joking aside the Steelers are a really good team with
many weapons on offense and at this time the Dolphins are down 5 starters on
defense. Which is a recipe for disaster in all honesty, but I do have some hope
for the Dolphins this weekend. The recipe for the Dolphins to win is very
simple in my opinion and comes down to two key factors.

1)
Bring the pass rush and kill the QB
2)
Run the ball early and often and keep the
Steelers offense on the sideline watching and waiting
Bringing the pass rush is essential this week. Suh, Wake,
and company must bring pressure all day long. This isn’t a week where the
Dolphins pass rush goes invisible. The Dolphins back 7 on defense is weak and
damaged right now playing mostly second string guys. The skill players for
Pittsburgh will have a field day against the Dolphins linebackers, corners, and
safeties.  The only way to offset that is
to make Ben Roethlisberger uncomfortable and hit him….hit him a lot! Football is
a violent game let’s not kid ourselves and if Miami can inflict physical pain
onto Roethlisberger that will get the Steelers offense off their game and maybe
rattle them.
Then on offense it needs to be the Jay Ajayi show. Jay ran
for 204 yards last time vs Pittsburgh and well, he will need another big
performance again. We must hope Pittsburgh makes the same mistake Rex Ryan and
Buffalo made a couple of weeks back. Publicly stating going into the Christmas Eve
game that; he ran for 200+ yards against us once, no way he does that again against
us. Well, how do ya like me now….as Jay went bonkers for another 200+ vs
Buffalo. I’m not sure Pittsburgh makes that same mistake but you must wonder,
if Pittsburgh didn’t have an answer for Jay Ajayi in October what has really
changed in January? I know Mike Pouncey won’t be playing for Miami this week
which is a huge factor  for Miami but
other than that the rest of the Fins offensive line will be out there.  Even if early in the game Miami is running
with little success, keep running it. Because the more Pittsburgh stacks the
box and the line of scrimmage it is just setting up a big play to Kenny Stills
and Devante Parker deep down the field. And IF (big if) Miami can hit one of
those, then Pittsburgh will back off the line of scrimmage and Ajyi could have
some big success in the second half of this game because as we have seen, as
the game goes on Ajayi gets stronger and better.

The other thing I want to stop hearing about is the weather
in Pittsburgh on Sunday. Give me a break people and think about this logically.
Cold and bad weather helps the Dolphins. Miami is a grind it out power run
team. Old school Smash mouth baby! Pittsburgh has the multiple wide receiver sets
who likes to throw it around the field. The cold and wet weather will most
likely bother them more than it will Miami. The colder and more wet the game
conditions are the better the chance for Miami to pull an upset in my opinion.

Look, I know this is a tall task asking Miami missing 5
starters on defense and starting a back-up quarterback to go on the road in the playoffs
and beat a future hall of fame quarterback and a good Pittsburgh Steelers team.
I also think Miami beating Pittsburgh earlier this year works against the Dolphins
because there is no way in hell they will take Miami lightly.

With that said I don’t
fear Pittsburgh at all this weekend and this match-up doesn’t totally scare me.
If Miami was playing Kansas City or New England, sure I would be very worried
and give us maybe no chance to win. Pittsburgh though, I think we have an
outside shot to win this game. Miami has the pass rush to disrupt Big Ben,
Miami has the running game to control the tempo of the game, and if Matt Moore doesn’t
turn the ball over and the WR’s make a play or two I think we can get into the
4th quarter of this game with it being competitive and a chance to
win. Which is all you can ask for being on the road in the playoffs.

It won’t be easy, but I have hope that Miami can pull this
off this week. #FinsUp 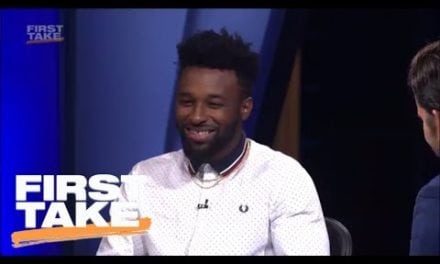 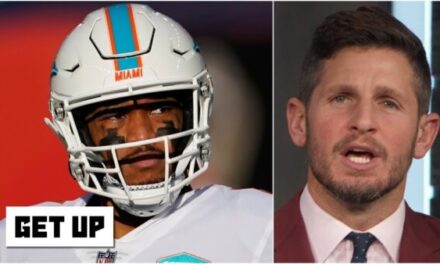 ESPN GET UP: Dan Orlovsky and Mike Tannenbaum talk Tua Heading into 2021 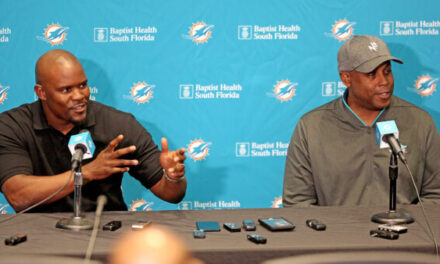