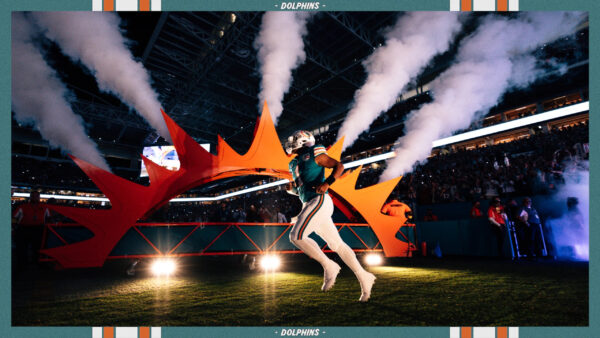 Tua Tagovailoa made his triumphant return to the field this week, so that means our weekly All-22 breakdown is also back this week.

Miami jumped out to a 13-0 lead and held on 16-10 to beat the Steelers on Sunday night, advancing to 4-3 on the season. For his part, Tagovailoa got off to a strong start before struggling to keep the Dolphins churning in the second half.

We strive to show all sides of Tagovialoa’s play in this article, but that doesn’t mean we’re going to lie. Tagovailoa didn’t play well on Sunday. He was consistently inaccurate with placement, made several bad passes that were dropped by the Steelers’ secondary, and left some meat on the bone in certain situations.

It makes sense that Tagovailoa looked a little rusty on Sunday. He hadn’t played since getting stretchered to a local Cincinnati hospital with a concussion.

But the NFL is a fickle business, and the reality of the situation is excuses aren’t worth much in the league.

Just because Tagovailoa played poorly on Sunday doesn’t mean he missed every throw. This pass to Sherfield over the middle of the field was easily his best throw of the night.

Tagovailoa does a nice job of recognizing the cornerback never turns around to play Sherfield. He’s got his eyes on Sherfield the whole way, and he’s not really in a position to turn around and check for the ball.

This allows Tagovailoa to throw the ball with the cornerback knowing. The throw is perfectly placed on Sherfield’s right shoulder, leading him away from the safety in the middle of the field ever so slightly.

This is a perfectly placed ball into a tight window roughly 30-yards down the field. These are the types of throws — if made consistently — that could help Tagovailoa climb into another quarterback tier.

This is the other quality play that stuck out in Tagovailoa’s film. He’s always been great at manipulating zone defenders in the flat and then whipping the ball right by them.

This throw to Waddle is a perfect example of that. If you watch the endzone angle, keep your eyes on number 35 in white. Watch him follow Tagovailoa’s eyes into the flat only to realize Waddle was streaking right behind him.

Miami’s RPO offense last season was awful, but one of the reasons it generated any points at all was because of Tagovailoa’s propensity to make exactly this throw.

It’s the traditional “eye manipulation” that will get some out of their chairs and banging the table, but it’s still high-level quarterbacking and a quality Tagovailoa has gotten better with over the years.

Let’s address the elephant in the room. Yes, Tagovailoa threw four passes that should’ve been intercepted. Three of them were on Tagovailoa, while one was knocked up into the air on a deflection.

This dropped INT is the easiest of the four to explain. Tagovailoa’s read to throw this switch route isn’t terrible. There’s some room on the sideline, and a perfectly thrown pass would’ve given Hill an opportunity to make a catch.

However, the ball leaves Tagovailoa’s hands completely flat as it never gains the proper depth, putting the Steelers’ DB in a perfect spot to make this play.

This play displays some of the limits on Tagovailoa’s arm strength. He’s got a strong enough arm to make this throw. However, his mechanics have to be perfect on a throw like this. If he’s even a little off, the ball will float on him more than it floats on some of the NFL’s elite quarterbacks.

It’s a fixable mistake, and it’s good to see Tagovailoa attempt to hit this throw — it would’ve been in the previous section if he did, but he didn’t.

This dropped INT defies explanation because there’s truly no version of this throw that results in a completion. We’ve talked about Tagovailoa having “goof moments” during the fourth quarter of games where he panic throws a pass into coverage knowing he should take a sack.

This appears to be one of those throws. The last one came against the Patriots in Week 1, but this has been something he’s struggled with since his rookie season.

The biggest issue with this throw is how nonchalant it is. Hill has a small amount of room, and the defensive back is in pretty good coverage off of play-action.

Tagovailoa is running out to his left and has to throw this pass a little back toward his right, which means he needs to put even more speed on the ball.

So we’ve got a small, closing window on a throw slightly across his body. Instead of a fastball, Tagovailoa throws the changeup, and it’s almost a brutal interception in a key moment.

One of the more surprising developments from Sunday’s game was Tagovailoa’s shaky placement. He’s typically, one of the best quarterbacks in the NFL at leading his receivers to YAC opportunities in the short to immediate areas of the field.

That wasn’t the case on Sunday night, and this play is an excellent example of accuracy vs. precision.

This throw is accurate. It gives Waddle a chance to make a play and pick up the first down. But, it also forced him to leave his feet and make an adjustment when in reality, there was no defender around him to cause this adjustment.

Tagovailoa lacked a little patience on this throw. It looks like he thought he needed to throw the ball before the linebacker dropped into the underneath window.

However, that linebacker wasn’t going to get there, and he had time to let Waddle clear that window anyway. That wouldn’t let him hit Waddle in stride and led to a lot of YAC. Instead, it’s a throw-and-play that leaves a lot to be desired. These types of throws were littered across Tagovailoa’s film from Sunday.

Again, Tagovailoa is usually strong in this area, so this isn’t to say he’s suddenly not. Instead, it should be something we monitor to see if this was rust from missing the past couple of games or a troubling trend.

Lastly, this fourth-down play is worth taking a look at. Like the previous play, this one falls into the category of “things Tagovailoa is usually great at that he wasn’t on Sunday.”

This fourth down play is an RPO with Sherfield coming across the formation and running straight into the flat. It’s important to keep in mind they only needed roughly one yard.

Tagovailoa is reading the right defensive end, and that end does stay home, which means it makes sense that Tagovailoa would give the ball to Edmonds.

However, on plays like this, there needs to be some critical thinking involved. Miami needs one yard, and although the defensive end stays home, there’s a zero percent chance he recovers to challenge Sherfield in the flat.

Tagovailoa has pulled this ball and popped it over the head of a defensive lineman many times in his career — even if conventional wisdom told him not to.

But, this time, he just didn’t. You can see Sherfield’s reaction after the play as he’s not pleased with Tagovailoa’s decision.

No words were minced at the beginning of this piece, and they won’t be here. Tagovailoa played badly on Sunday. There’s no way to get around it.

However, there are ways to understand it. He’s just come back from a devastating head injury, so it’s fair to chalk some of his mistakes up to rust and see if he bounces back with a better performance against the Lions.

This performance shouldn’t change our opinion of Tagovailoa. He still did enough to win the game, and he’s clearly the best quarterback on Miami’s roster.

Bad games happen for quarterbacks of all calibers. The important part is to acknowledge them, and then make sure they don’t happen the following week.

There’s no reason Tagovailoa can’t do that this week. 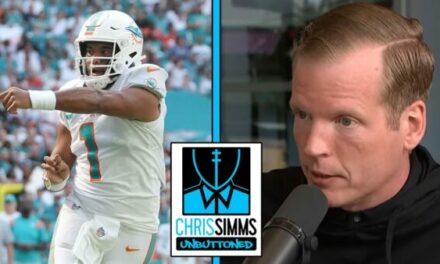 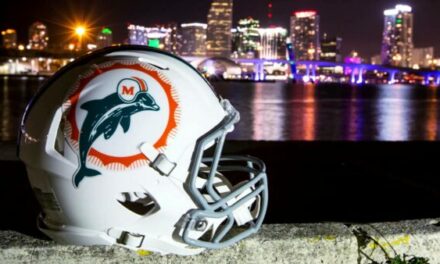 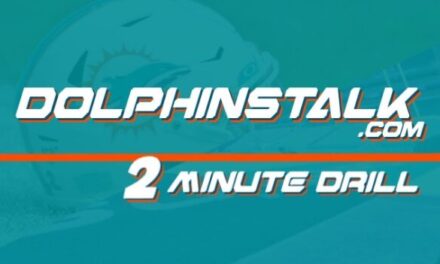