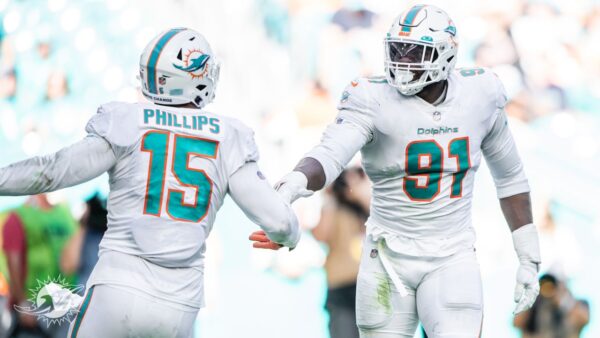 As I approach my first article for DolphinsTalk.com, I am delighted to be doing so on the backdrop of a win! Too many times this season, we have been ruing missed opportunities, mistakes, and poor decision-making. As we went into the Texans game, everyone was being blamed from one section of fans to another. Whether it be underperforming players, draftees not living up to expectations, coaches and their play calls, or even whole position groups and Head Coach, General Manager, and Owner, everyone was on the hook within some narrative or other.

Then we played the Texans, coming up against a very poor team, we performed poorly at times, but all that matters is that we came out with a win. Then we approached the Baltimore Ravens game, on a short week, without our starting QB being fully fit and against a team that had outscored us by over 100 points in just the last three meetings.

So much cause for negativity and a game that we had no hope of winning on paper.

And not only did we win, but we stifled an aggressive Ravens offense. We limited them to the fewest points they have ever scored with Lemar Jackson as the starter. We shut them out on third down again, and again and again. We looked more and more like the creative, aggressive defense that we fell in love with last season. Dare I say; we finally started to look like a Brian Flores defense again.

Now our head coach vehemently denies taking over the play-calling, and technically that may be the truth, but there is no question to me that he was involved. In training, in camp, in the building, and the days leading up to the game, Coach Flo must have got his hands dirty with the defensive group. And then there’s the fact that multiple times during the game, he was seen with a play call sheet in his hands. He may not have been sending them in, but I have to believe he was in the conversation.

So this made me think, just where have our performers been on defense this year, there is no question they have not lived up to expectations, yet with such an incredible performance this week, I thought I’d take a look at a few areas.

We came into the season needing support and improvement in the pass rush game, and when we consider the stats, it looks like this is still the case. One thing is clear though, Emmanuel Ogbah is crucial to what we do in the pass rush game, and we have to hope there is a plan to keep him in South Florida past the end of this season. He leads the way on defense with five sacks, which totals a team-leading 39 sack yards, and is tied in first place with Christian Wilkins on six tackles for loss. He has also defended seven passes while rushing the passer, creating a profile of a dangerous pass rush weapon that must be resigned.

However, after him, there is a bit of a drop-off, with Jaelan Phillips the next total number of sacks with only 2.5 and then four different people with two sacks each. Brandon Jones is one of them, and he is next in total sack yards too, some 17 yards behind Ogbah, and is also tied second in tackles for loss with 4, alongside Andrew Van Ginkel.

But these are pretty modest numbers considering we are now ten games into this season. Our pass rush looked meaner, more creative, and problematic against the Ravens, with the likes of Jevon Holland getting into the act too. Still, it is clear we must become even more productive in this area and KEEP EMMANUEL OGBAH if we are to regain the form we saw in the Ravens game on a longer-term basis.

Earlier in the season, we held an incredible active record of consecutive games, which included a turnover. With us, at 24 games and the nearest team to us on eight, we had built a reputation for getting the ball back and making key defensive plays. Xavien Howard put up huge numbers last season, with 10 INTs himself, and team defensive touchdowns were quite a regular occurrence.

However, this was another area we seemed to drop off. But only slightly. A key difference this year was that when the defense created a turnover, time and time again, the offense would fail to make it count, and on more than one occasion would turn the ball over themselves on the very next drive, maybe even the very next play.

But when you dig into the numbers, maybe the defense has done their part here after all. Now, interception-wise, we seem low on numbers. Team wide we only have 7, with Justin Coleman and Xavien Howard having two each and Jevon Holland, Jerome Baker, and Elandon Roberts each having one each. A far cry from last year.

But then I looked at forced fumbles, and this is one area this Miami defense has made a decent impression. Last year, from the entire season, we forced 16 total fumbles, with 10 of them recovered and two going back for touchdowns. This year we have already forced 12 fumbles while struggling as a team, and we are heading into the easiest part of our schedule. Of those 12, Eric Rowe stands tallest, having forced three of them, while 8 of the 12 have been recovered and one making it back for a touchdown. Therefore with seven games still remaining, we are just four fumbles off last year’s total and only two recoveries and one touchdown away too.

For me, while we may be off the pace where interceptions are concerned, we are ahead of the pace where forcing fumbles are concerned. If we can get closer to the levels we showed against the Ravens last week; then I have no reason why turnovers can’t still be a key part of our defensive production. 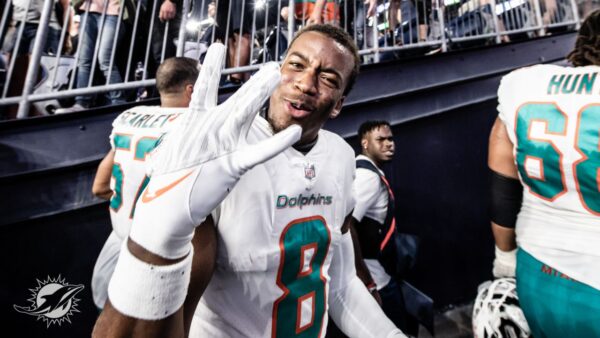 I guess here we are really looking at two names. Jaelen Phillips and Jevon Holland.

A lot has been made of the draft picks made by Chris Grier over recent years, with so many of them underperforming this year. On the defensive side, second-year pro Noah Igbinoghene is one of the biggest culprits, being a healthy inactive on multiple occasions this year. But also people like Jerome Baker and Christian Wilkins have been targeted as some people see them as not living up to their investment, Wilkins as a past first-rounder, and Baker on his contract extension.

But this year’s rookies seem to be settling in just fine. While neither of them was immediately explosive in terms of turnovers, sacks, and highlight-reel impact, they have both been productive cause issues for offenses, and shown a lot of promise as they have grown into the season. As I have already talked about, Philips sits second in the most sacks category, even if it is a modest total, but he has a huge amount of quarterback pressures. Watch his tape; he never gives up on a play. Go back to the Ravens game, he would start lined up on the right end of the defensive line and yet cause the pressure on the left touchline. In previous weeks, runners would break gaps, or receivers would hit routes, and then yards ahead of the line of scrimmage, Phillips would be one of the first on the scene. He has been doing his job in the pass rush and the job of many others as he never quits on a play. He needs greater stats; he needs to finish a lot of these plays. But there is definitely cause for optimism.

And then there is our new #8. Jevon Holland. The new darling of many Miami Dolphins fans… myself included.

We all know what Minkah Fitzpatrick was meant to be; we all know how badly that went for us. When you consider that the pick we got for him was spent on Austin Jackson, it only looks worse given his poor performance this season. But now, Jevon Holland looks like the player we thought we would get when we drafted Minkah. With 38 total tackles, 2 sacks, 2 tackles for loss an interception, a highlight reel of hard hits and aggressive plays, and PFF grades that have constantly ranked him with the elite names of his position, Jevon Holland looks like a veteran already and between him and Brandon Jones, we could have a safety duo there that is a mainstay of our defense for years to come.

Who doesn’t love a tackle? Especially the hard hits and the third-down stops. Well, our defense has been on the field a LOT this year so tackle numbers don’t really seem to be a cause for concern.

At this point, we have registered 729 total tackles, split between 37 different players. Even the likes of Devante Parker, Jabaal Sheard, Salvon Ahmed, Mike Gesicki, Greg Mancz, and even Tua Tagolvailoa have each registered one official tackle.

But to our defense, currently leading the way is the newly paid Jerome Baker, with 54 tackles. Playing in a weak linebacker group that lost two key veteran presences last off-season, Baker has come under criticism himself this year. But he remains the only Miami Dolphin to have registered over 50 tackles at the ten-game mark. Closest to him is safeties Eric Rowe and Brandon Jones, along with Andrew Van Ginkel all on 48 tackles each.

Those stats are all well and good, but when you look back at the disappointing performances of our season, there were missed tackles evident in all stages of defensive play, with Run defense suffering most. Having cut Kyle Van Noy and traded Shaq Lawson in the off-season, and then cut Benardrick McKinney, who they received in the Lawson deal, you would have expected the linebacker group particularly to have fared better. How can you cut such solid, productive players only to perform worse as a group? It’s almost nonsensical.

That said, against the Ravens, tackles were exactly where you want them. Rookie Jevon Holland set the tone on the first drive of the game, as the receiver swept behind the OLine and broke down the sideline. Covering cornerback Xavien Howard was impeded by his own man, only for Holland to meet the attacker on the sideline and blow him into the benches with a huge hit. That tone-setter paved the way for hit after hit, tackle after tackle, and a Miami performance that brings hope and excitement to this defensive group once again.

So it is undoubted that Miami has struggled defensively over this season and from an area initially considered a strength. No doubts there. Also, one performance does not a season make. As impressive as the Ravens performance was, it means little if we go back to our old ways against the Jets this coming Sunday.

That said, there was something about the manner of that Ravens win that can give us real hope again. Every hit was followed by bounce, celebration, camaraderie, which has seemed to be missing at times this season. I have been shouting plenty for our players to look like they cared about our form and position, and last week they looked like they did.

We have exciting young players who are already outperforming some of the veteran players on the team and in the league and looking like they could be pieces to build around for a long time to come.

Our defense hasn’t been what we wanted it to be, but the talent is undoubtedly still there. If they can find their fight on a consistent basis and Coach Flores can help them regain their identity, then we could have a defense on which to build a football team once again. 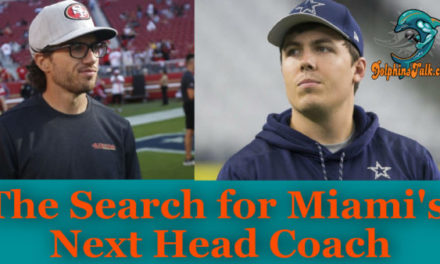 COVID LOCKDOWN: How it Affects the Miami Dolphins 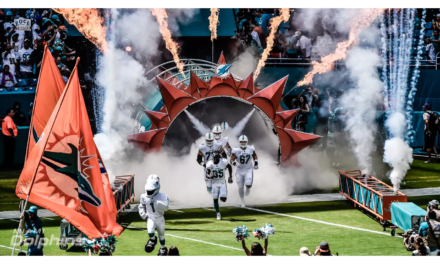