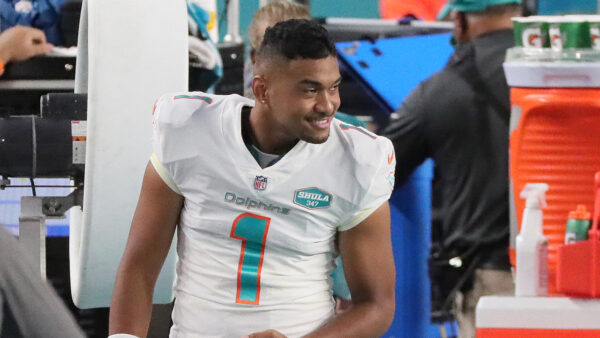 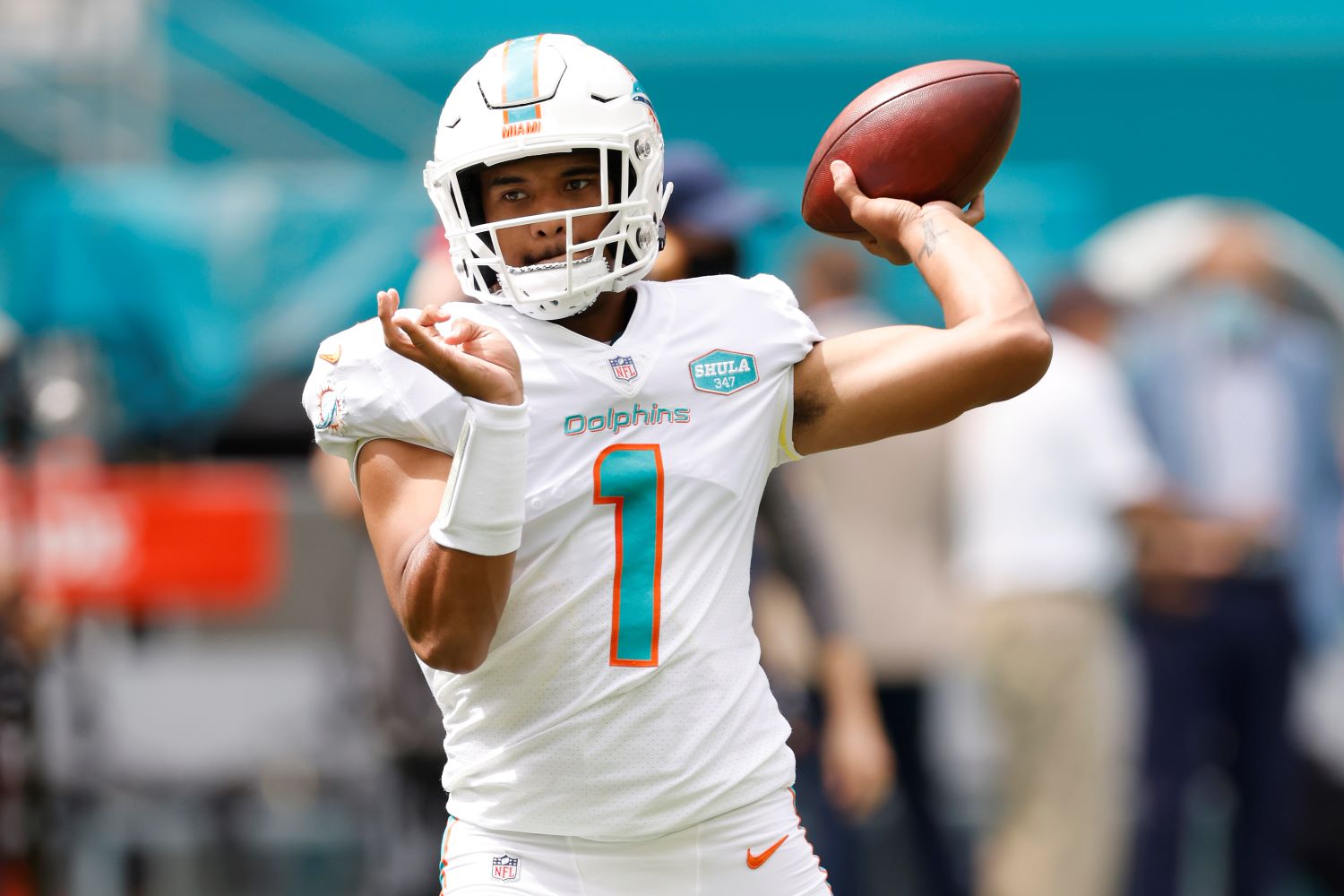 The time is near, Dolphins fans.

After all the drama caused by the national media surrounding Miami’s quarterback change, all the bickering about the timing of the move, and all the praise from within the Dolphins organization this week, Tua Tagovailoa will take the field for the first time as the franchise’s starter in a few short days.

The future will be taking the field on Sunday, and fans around the world will watch with bated breath.

Tua isn’t going out there to throw a couple of garbage-time passes against the Jets. It’s for real this time, and this week eight game against the Rams carries real weight for the 2020 season. A victory would put Miami above .500 for the first time in Brian Flores’ young head coaching career, and in a good position to make noise the rest of the year in a division that’s very much up for grabs.

But most importantly? It would be a fantastic way to start Tua off as the face of the franchise.

While the Dolphins looked great the two weeks prior to the bye, the Rams team they’ll face on Sunday is no joke. The club is well-coached, talented, and led by a defense that will look to stifle the young quarterback that represents the hopes and dreams of Dolphins fans everywhere.

Make sure you are subscribed to our @DolphinsTalk @YouTube channel. Click the link and subscribe and check out our DolphinsTalk STAFF ROUNDTABLE DISCUSSION w/@DolphinsTalkTom @ian693 @AarontheBrain & @AmplifiedtoRock #FinsUP https://t.co/in3tgrbm3n

The Rams defense features big names like Aaron Donald and Jalen Ramsey, marquee players at their respective positions. They’re also second in scoring defense per game, allowing only 17.7 points per contest. In case you’re mathematically challenged like me, that’s pretty close to only two scores per game. They’re an extremely solid defense when it comes to points allowed, and do their best work in the second half of games.

Donald especially should make Miami nervous, as he has been dominant as usual when rushing the passer and will look to capitalize against a young Dolphins O-line. The onus this week will be on the interior line especially to keep Tua upright and give him time to make the most of his starting debut. If Ereck Flowers, Ted Karras, and Solomon Kindley — the big bodies upfront — can prove the doubters wrong, look for Miami to have room to operate on offense.

The bad news is that even if the Dolphins offensive line plays a solid game, there’s a good chance Aaron Donald will squirt through a couple of times. He’s just too good not to. And that means that Tua, in his first full game since his hip injury, is probably going to get hit a couple of times. It would be encouraging to see him throw the ball away when the play clock in his head times out and protect himself in any way possible otherwise.

But the good news?

The Dolphins have been a respectable defense in their own right. After a rocky start to the season, Miami has rebounded in a major way, now coming in as the third-best scoring defense per game (allowing only 18.8 points per) and the seventh-best passing defense in terms of yardage. The return of Byron Jones to the defensive secondary has been monumental to the defensive effort, and that group will look to keep Jared Goff and his talented receivers in check on Sunday.

Speaking of wide receivers, this brings us to the Rams offense. Sean McVay runs a creative offense and often features his wideouts as runners taking handoffs out of the backfield. He also incorporates a ton of pre-snap motion and keeps the offense lined up in an extremely tight alignment. These things, paired with the Rams’ propensity to run an up-tempo offense, are all meant to keep defenses off balance — defenders can lose track of men in motion, get caught in traffic because of the tight alignments, or get set too late because of the high tempo.

It’s difficult to defend against.

I believe the Dolphins defense will be ready for the Rams because of Brian Flores’ coaching, but my concern is this — Miami has been able to play with a sizable lead in the last two games against the 49ers and the Jets, which took the opponent’s running game away. Sean McVay, however, is an extremely patient play-caller who will stick with the run no matter what, so Miami may not have the benefit of defending against a one-dimensional offense even if the team is able to jump out to an early lead (also a tougher ask this time because of the Rams defense).

The bottom line is that the Miami defense must be active, disciplined, and tackle well to get off the field and get the ball back in the hands of the offense and rookie QB Tua Tagovailoa. One encouraging sign is that they did a fantastic job defending against a Niners offense that also features a lot of window dressing before the snap.

I’m not as worried about the secondary against Jared Goff, so if the Dolphins can stand up to McVay’s rushing attack, I think Tua leads his team to a win. If not, it may be difficult to score enough on this Rams defense to lift the Dolphins to victory.

Speaking of Tua, something needs to be said before his first start finally arrives on Sunday.

He has all the talent to be a top-tier franchise QB in this league, but this is his first career start. I truly believe that Tua will be one of the best quarterbacks in the game in a few short years IF he can stay healthy. If his offensive line can keep him upright. If he can break his habit of holding onto the ball too long.

The talent is there, the leadership ability is there, and the intangibles — they’re all there. Tua even spent almost the entirety of the bye week at the team facility, prepping for his big day.

Tua Tagovailoa spent everyday of Dolphins bye week except Sunday working at the facility getting ready for 1st start.

“My leadership plan is just to be the same Tua I’ve always been. I don’t have to go out yelling at guys. That’s just not the way I lead. I’m just going to be me” pic.twitter.com/r1Y4IUpQbj

But I say again: Be patient.

If you’re interested in this kind of thing, Dan Marino also made his first start with the Dolphins sitting at 3-3 his rookie season (*audience dons tinfoil hats*). Marino, however, threw an interception with his first pass and struggled in the first half. Hilariously, fans actually started chanting “we want Woodley!” (*audience takes off tinfoil hats*). The rest of his rookie year, however, he led his team to nine victories out of eleven games and secured a playoff berth.

From there, we all know what Marino then went on to do in 17 seasons with the Dolphins. He was a revelation for the entire game of football.

Peyton Manning, on the other hand, struggled his entire rookie season. He threw a whopping 28 interceptions on his way to winning only three games all year. Like Marino, though, Manning would go on to be considered one of the greatest quarterbacks of all time after a storied career.

My point is this: Tua’s debut may not be all sunshine and daisies. He may struggle, maybe just for one half, maybe for a few games, maybe for the rest of the season. And if that happens, you can bet the farm that the national media will start calling him a disappointment and trash him compared to fellow rookies Joe Burrow and Justin Herbert.

But remember this, Dolphins fans — we need Tua for the next ten years, not the next ten games. And my money’s on those ten years working out with Tua as long as he’s healthy, no matter how the start goes.

Expectations are high for Tua, there’s no denying that. But everyone within the Dolphins organization seems to believe that this young man is ready for the challenge, and fans are itching to see him in action. Be excited, be optimistic, and look for growth. But in a word, be patient with Tua.

He’ll be here for a few years, and hopefully long past that.

And if the Dolphins can keep him in one piece on Sunday with Aaron Donald coming to town, he might be just what this franchise has needed. And none Tua soon, if I say so myself. 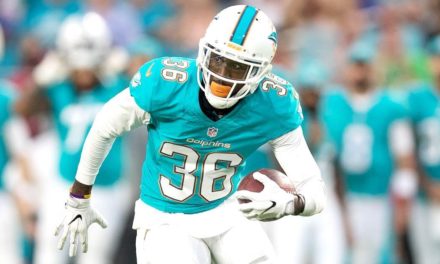 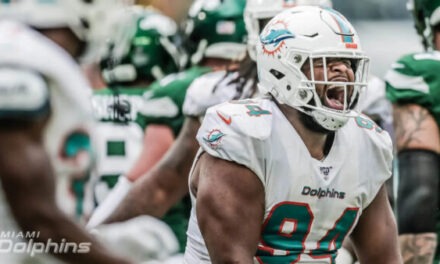 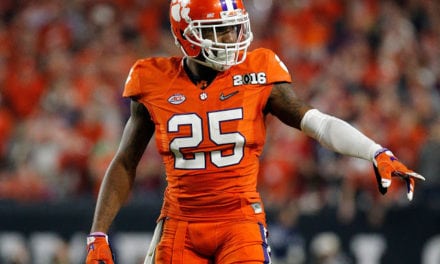 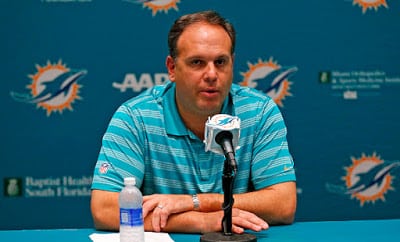